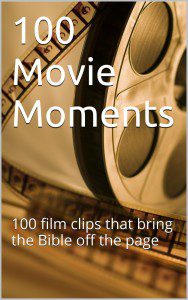 2. In the movie Home Alone…
Kevin has been banished to the attic for being rude to his family the day before they fly off to Paris for Christmas. In his anger he wishes that his whole family will disappear. The next morning the family wake late and have a mad dash to the airport to catch their plane in time. As Kevin’s mum finally flops down into her aeroplane seat she sighs, ‘Hope we didn’t forget anything.’ Back home Kevin is just waking up, They did forget something. Kevin.
It’s a great moment that mirrors the story of Jesus the boy left behind in Jerusalem.
Themes: Jesus left in the Temple as a boy
Bible: Luke 2 vv 41-52

3. In the movie Enemy of the State…
Robert Dean is a happy successful married lawyer. But all that falls apart when he meets an old friend who secretly hides a computer disc amongst Robert’s Christmas shopping. The disc contains incriminating footage of a political assassination. So Robert becomes a target. The National Security Agency wants that disc back, and they’ll stop at nothing to track Robert down. They bug his house, his clothes, his watch, everything. He loses his job and all his credit cards get cancelled. Robert is on the run, and being hunted by NSA agents using all the very best technology available. Everywhere he goes he is watched and it seems as if there is no way out. Agents are secreted in nearby vehicles and buildings and some even on the ground as tramps and shoppers. This is a major surveillance operation. Everything Robert does now is being watched and taped.
It’s a great parable about who might be watching us.
Themes: Is God always present and monitoring us? If so, what does that mean? Big brother or kind father?
Bible: Luke 18 vv 1-8, Psalm 103 vv 8-14

4. In the movie Monty Python’s Life of Brian…
Brian and his mum are off to a stoning. It’s a local boy so they reckon it should be good. They discover that the accused is on trial for saying the name of Jehovah. In his defence the poor man claims all he said was, ‘This halibut is fit for Jehovah.’ But this is not good enough. It is totally forbidden to utter the name of Jehovah aloud, and anyone doing so must be stoned. After much debate and heckling from the crowd, and several false starts, the priest in charge gets stoned because he utters the forbidden name of Jehovah himself.
It’s a great example of misunderstanding the nature of God.
Themes: Fear of upsetting God, the compassion of God, what does it mean to honour God
Bible: Psalm 103 vv 11-14, John 3 v 17, 1 John 3 v 1

5. In the movie The Killing Fields…
Following the takeover of Cambodia by the Communist Khmer Rouge in 1975, journalist Dith Pran now lives in a labour camp in the forest. His days are filled with long hours of work, and in the evenings he attends the re-education classes. He explains how the Party indoctrinates everyone, and that they now live under the all-powerful Angka. Angka is all that matters now. The people must not think about life before the revolution. God is dead and now the Party will provide all they need. There are enemies everywhere and they can trust no one. They must only love Angka, they must only think of the Party. Although people starve they must not grow food. They are indoctrinated all the time. They must have no past. There is only year zero. Dith must show no understanding, no emotion, no intelligent thinking. He must pretend he is just a lowly peasant worker. Calls are often given out for former teachers, students, professors – anyone who is educated– to come forward. But when they do they are never seen again.
It’s a tragic example of the way people hurt and control each other.
Themes: Power, humility, corruption, compassion
Bible: Daniel 3 vv 1-7 and vv 19-22, John 13 vv 13-17, Luke 23 vv 1-12

6. In the movie Payback…
Hard-man Porter lies on a table in a filthy kitchen while a whiskey soaked doctor removes the bullets from his back. We hear Porter’s voice telling us about himself. His wife and his friend stole $70,000 from him and tried to kill him. But he has survived and he wants his money back. So now he will get even with them. In a gravelly payback kind of voice, he says: ‘They say time heals all wounds, and you’d think after five months of lying on my back I would have given up any idea of getting even. Just be a nice guy. Call it a day. Nice guys are fine – but they always finish last.’
It’s a story which raises the whole issue of revenge.
Themes: Revenge, forgiveness
Bible: Mark 5 vv 38-42, Leviticus 19 vv 16-18

7. In the movie Monsters Inc…
Monstropolis is a place full of scary creatures. Every night the monsters sneak into children’s bedrooms and scare them. However, in reality it is the monsters who are scared, they fear any real contact with the children and when one little girl, Boo, sneaks into Monstropolis all chaos breaks loose. Sully and Mike whisk Boo away and hide her in their apartment trying to limit the damage she might inflicts by cornering and controlling her. When Boo starts to scream there is a power surge in the apartment block and a nearby helicopter swoops by to investigate. In order to stop the screaming Sully starts to entertain Boo – and then something astonishing happens. Boo starts to laugh and there is another power surge. But this one is so big it blows all the fuses in the building.
‘What was that?’ asks Sully, amazed.
‘I don’t know,’ says Mike, ‘But don’t make her do it again.’
What Sully and the other Monsters don’t realise is that laughter generates more power than screams.
It’s a great example of the power of humour.
Themes: Humour, laughter, the way Jesus communicated with funny stories and anecdotes
Bible: Mark 4 vv 33-34, Psalm 126 vv 1-2, Genesis 21 vv 1-7, Jeremiah 33 vv 10-11