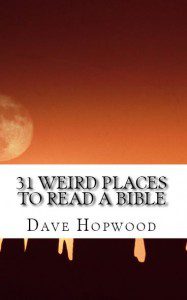 From Stonehenge to Angkor Wat, at the wrestling, the cinema, the supermarket. In the butcher’s, the high street or the kitchen. Dave Hopwood finds good reasons to read a Bible anywhere. Connecting the stories in the good book with the stories of our everyday lives.

'Young man, grab some wheat and barley and emmer and mix it into a tasty dough. Then nip to the loo, catch what you produce and mould that into a well-shaped lump. Let it dry out, take a photo of it, and then set fire to it and cook a nice loaf of bread over it. Won't smell great but it'll look delicious...'
But Ezekiel was horrified, threw a strop and said, 'No way! That'll make me unclean and unholy and worst of all it'll get under my nails!'
And though God had told him to do it he refused. So they bantered for a while until God relented and changed his mind and said, (divine sigh) 'All right, tell you what - you can use cow dung. Go get a bucket and sit behind that cow and when the bucket's full of brown slurry dry that out and torch it. Then tell the people - as disgusting as this is it's what life will be like for them if they keep on ignoring my ways of kindness, justice and peace. Off you go. No you can't use hamster poo. Or gerbil's. There's a nice full fat cow over there. Oh and you're gonna need a bigger bucket than that. I dunno, you prophets are getting harder to work with every day...'

There are times in the Good Book when it seems as if God breaks his own rules. Ezekiel wasn't just a prophet, he was a priest and according to the law of Moses priests could not handle this kind of stuff. It made them unacceptable to God. Leviticus chapters 21 and 22 are full of things that make a priest unclean. And yet here is God saying to Ezekiel, 'Offend me! Offend me! I want to get through to these people. They need to be shocked like this. It's a wake up call! Handle the poo! The public need to wake up and smell the... er... well you get the picture...'

When I was considering doing this book I mentioned the idea to someone who said that they thought some Christians might be offended by the notion that you can read your Bible on the loo. I pointed out that many people do it and they replied, 'Yes, but they don't want to talk about it.'

It's easy to think external things make something holy. And it's easy to misunderstand the Bible on that point, when so much Old Testament time is given over to describing temples and alters and robes which somehow help the people engage with God. But these were just devices created by people, often inspired by God, to create space for the developing relationship with this God who is 'other' - different to anything we ever see on this big planet.

Then - blam! - we get to the New Testament and - shock!! - the dark truth is revealed.
The glory of God is not found in 'holy' temples, or vast churches or in a man with clean hands wearing a neatly-pressed nightie.

It's found in a man with scars on his hands, sweat on his face and sawdust in his hair. A man who laughs and eats and argues and tells jokes. A man who spends most of his time with 'unclean' and unacceptable people and is quite happy to touch what others think is 'unholy'. The glory of God is found at parties and hanging around near brothels, chatting to the prostitutes who work there and the guys who visit them.

The God of Ezekiel is well and truly revealed and we find a compassionate creator who is not made unclean by outward things at all. Instead we meet a God who brings life and health and hope to the darkest places by going into those dark places and sitting down in the dung. Worth remembering this next time you're enjoying quality time with the Good Book on the loo. You may well bump into God in that 'dark dark place'.

P.S. In case you were wondering - emmer is a sort of wheat. Worth remembering that for the next time you're watching Who Wants to be a Millionaire.
Chris Tarrant: Is emmer -
a/ a Jane Austen character?
b/ the letter in the Greek alphabet between eller and enner
c/ a dale in the er... dales which used to be a gentle farm but is now a place where people argue, murder, drink in the pub and only come out on weekday evenings
d/ a low-yeilding awned wheat used by Ezekiel to make bread to cook on cow crap?

Answer: Yes! It’s d - the latest prophetic cooking fad. And a perfect reminder that life can fall apart when we forget the ways of God.

'And I hunched in my back row seat in the Patmos Multiplex and I stared open-mouthed and full of nervous anticipation in front of the huge 4D Imax cinema screen, with surround sound and free coke and popcorn. And as I watched I saw a huge white stallion appear, ridden by a majestic, gold-armoured king. It passed by in slow motion and was a beautiful, glorious sight. Bohemian Rhapsody played in the background, the sound filling the arena. It was the most thrilling sight I'd ever seen. Suddenly there was an almighty scream and the king pulled out a giant bow and began firing a torrent of razor-sharp arrows which pierced the hearts of all those he met. Then more hooves thundered towards me and a red horse followed the king, sporting a rider clutching a massive sword that was bigger than Excalibur, and the rider threw back his head and gave a bloodcurdling war-cry and soldiers swept over the hill behind him and made war, dropping dead in their thousands, the bodies piling up and rotting as the film speeded up. Hyenas ripped the bodies apart and there was slaughter everywhere. Cut to a cold black horse and a deathly pale horse, who looked bloodless, like a corpse, and the riders rode back and forth across the huge screen as wild animals and mythical beasts came out of the undergrowth, tearing flesh and spitting blood, and a plague swept across the screen. The auditorium was full of the sound of groaning and screaming and everywhere I looked there was death and destruction, buildings on fire, people looting houses and stores, others dying from open wounds and terrible plague. And I didn't feel very well. This wasn't the romantic comedy I was expecting at all.'

There's no doubt that God loves the big screen.
The Bible begins with a blank canvas on which Jesus creates massive animated galaxies and fills them with scenes of awesome imagination. Planets appear from nowhere, dust gathers together and morphs into people, animals, gardens and jungles.
The Bible ends with an epic tale of such visual proportions it makes Lord of the Rings look like Songs of Praise. Dragons do battle with women, fatal plagues pour forth like a volcano spewing its guts and the body count is bigger than Die Hard. Which is saying something.

Now admittedly it's a bit difficult to read your Bible in a darkened auditorium. Finding your way round any book, never mind the Good Book, in screen 1 is fairly impossible, and the moment you get out that little pen torch you'll be upsetting the man in front whose head is blocking your view, and annoying the child next to you who's eating a monolithic family bag of crisps that crunch so loud you can't hear the screams in the movie. But that's another story.

Never fear - you may not need to take a Bible into screen 1. The living 'word' may well already be there. You might find it in anything from a 30-second advert to an 18-hour epic. (Anyone watch the Star Wars Double-Trilogy back to back? Surely life's too short...)
You see, you don't need a book - God's 'word' is not just written material.

Isaiah, Ezekiel and Daniel all saw things that put Messers Spielberg and Lucas in the shade. They then passed on these visions and encounters as stories told in the towns and villages. Eventually they were committed to parchment and became the written word. But for much of history these were big screen adventures that were passed on round campfires and by bedsides. Stories that amazed and thrilled and captivated and inspired children and adults alike.

The entire book of Revelation plays out like The Fourth Film in the Lord of the Rings Trilogy. The one to top them all. This is big screen communication - John lays back and watches the skies and sees the curtains open on a massive story that must have cost millions to make. It would certainly cost millions for JJ Abrams and Peter Jackson to reproduce it. And boy I wish they would. Can you imagine it - more CGI than you can shake an Apple Mac at.

It's easy to limit our imaginations when reading the Bible, but believe me this is a hugely imaginative book, full of all kinds of genres including spy thrillers, action adventures, romantic comedies, historical epics and costume dramas. It's easy to reduce it to a manual of rules, guidance and theology. But this book is too big. It is billion-dollar storytelling at it's best. By comparison Hollywood has only just begun. No one has a bigger imagination than God.

So the next time you are sat in the dark watching huge images on a white screen spare a thought for the God who first thought of story telling and put it on the widest screen of all.