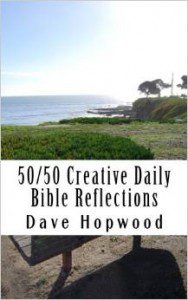 A collection of 216 short 50-word reflections. ideal for a quick reflection or a creative Biblical thought. A sideways look at Biblical stories.

Fifty Tales From the Dark Pews

1. Incognito
She sits at the back, far right-hand corner and waits. A few notice her but most don’t. She’s there every week, watching, waiting. Looking for those moments when she can step in with a kind word and an encouraging smile. Waiting to be welcomed, and offered that cup of tea.
Hebrews 13 vv 1-2
Remember to show hospitality, for you never know when the visitor will be an angel.

2. The visiting speaker
They’ve been looking forward to his visit for a while now. The place will be packed. It’ll be a good night, there’s a real buzz about it. Some think him controversial but others find him a breath of fresh air. Either way they’ll be at that place of worship.
1 Corinthians 3 vv 4-6
Ezekiel 33 vv 30-32
Someone might say ‘I’m a fan of Paul’, someone else, ‘I’m a fan of Apollos’. Isn’t that missing the point?

3. The farmer
He first encountered God out in the fields. He comes to church because he feels he should, but out there, in his workplace, amongst the crops and animals, that’s where he keeps bumping into the face of the Almighty. Church calms his anxieties, but nature breathes life into his faith.
Luke 2 vv 8-14
Psalm 23
As he sits near the sheep he contemplates the shepherd’s psalm. Suddenly his thoughts are interrupted by a choir in the sky.

4. Lost girl
She loves the singing and finds solace in the liturgy. But the Lord’s prayer is tricky. There’s that line about forgiveness and forgiving others. Whoever wrote that had not lived her kind of life. Abandoned by the one she trusted and pushed around by her family. It’s a tough prayer.
1 Samuel 18 vv 20-28
2 Samuel 6 v 16
Saul’s daughter Michal fell in love with David, little knowing that she would become a pawn in a deadly power struggle.

5. Old warrior
He’s been in some dark places, lived through some terrible trials. And he’s seen God’s hand, God’s deliverance. Now he’s hanging on for it again. Waiting for the light to dawn. For the night, with its panic attacks and soul-corroding fear, to disappear in the Light of God’s dawn.
Psalm 102 vv 1-7
Lord wake up! Take notice of me down here and do something. I am falling apart and without your help my life will crash.

6. The ancient guy
He’s been going around the block since before there ever was a block. Seen it all, a wise head on those drooping shoulders. Still has a twinkle in his eye and a smile. But he’s a realist, he knows life is tough for the young. He chats, prays and listens.
Ecclesiastes 11 vv 7-9
Life is sweet, yet whether young or old it’s not easy to appreciate it. Too many dark days can cloud your vision.

7. The odd couple
A while ago they took to living their dream. Walking into the unknown with their God. The problem is, a few years on, it still feels like they’re off the map. Still limping into the unknown. Living their dream continually leads them into uncharted territory. Perhaps it’ll always be so.
Genesis 15 vv 1-8
Abraham threw back his head and whispered to the night sky. He muttered of his longings for an heir and a son.

8. The handyman
He's never thought of himself as that spiritual really. He’s always there when a drain needs fixing or a fuse has blown. Now suddenly he’s in great demand. The biggest project he’s ever attempted but he seems to be the best man for the job. Where’s his Black and Decker?
Genesis 6 vv 13-15
God said to Noah, ‘Make a boat for me, here are the details and dimensions.’

9. The capable man
He doesn’t want to talk about it. Feels an idiot. Can’t appear weak. Doesn’t want to have to ask for help. And he knows if he does someone’ll make embar- rassing suggestions about taking the issue to God. Doing something that’ll mark him out as a useless fool. Men don’t do that.
2 Kings 5 vv 1-12
Naaman was highly respected and a fine soldier. But he had a problem, a weakness. Something he found hard to face.

10. The ambitious mother
She wants to see the vicar. Has been on at him for weeks. When will her boys get to do something up front? When can they play in the band? They’re gifted lads. People should know about it. Hasn’t considered other jobs they might do. Lower profile activities. Oh no.
Matthew 20 vv 20-21
The mother of James and John went to Jesus to set things straight. ‘When you’re in power, give my boys top jobs.’ she said.

A fistful of daily 50-word reflections, one from each of the 66 books of the Bible.

1. We never discover what happened to the coat, but we know the dreamer hit on hard times – slavery – wrongful arrest – prison – forgotten. He may have been impetuous, spoilt and naïve… but his hard times changed him: ‘What you meant for harm – God used for good,’ he told his brothers later.
Genesis 45 vv 3-8
Joseph’s brothers were speechless to see him there alive. But he kept telling them, ‘This is God’s doing, I’m here today for a reason.’

2. He was in training and never knew it. Born into one social class, rescued into another. Zealous for justice he lashed out and killed, well-meaning but murderous. He ran and took up leading sheep across a desert. Forty tough years later he was tired, disappointed - and ready. Trained up.
Exodus 4 vv 10-12
‘Lord, I’m no good at speaking, don’t ask me to do this,’ Moses said. ‘You’ll be fine,’ said the Lord, ‘I’ll help you speak well.’

3. Two youngsters, full of disrespect, wanted to prove a point. They could make fire fall, they’d seen it happen with dad and they wanted a piece of that. Bring it on. So the fire fell – and they were no more. Once loyal, they took the law into their own hands.
Leviticus 10 vv 1-2
Leviticus 8 v 36
Aaron’s sons took it upon themselves to call up God’s fire. But they did not know what they were doing and were burned up themselves.

4. Easy to overlook the ordinary. Easy to forget the miracles of each morning. Distracted by others the people can only see what they haven’t got. Might as well have been passing advertising billboards in the desert. ‘You need more!’ ‘Why settle for less?’ Free food suddenly became a burning issue.
Numbers 11 vv 4-6
The people forgot about their trek to freedom and thought of the old days. They forgot the slavery they endured and craved the comforts of Egypt.

5. Ground zero. The foundation stone. Before everything else, above everything else, upholding everything else. When everything else fails, return to this moment, this telling of truth. And the One of Love calls us to share his image. Wholeheartedly, unreservedly. Avoiding the substandard, a tough call. Easy to settle for less.
Deuteronomy 6 vv 4-6
The Lord our God is one, and we are called to love him with all we have - heart, soul, mind, strength.

6. Another unlikely hero lays her life on the line. Christendom is littered with them. The small people who harbour vital spies and enable them to flee to freedom. A red rope of grace lets them, and her, down safely. And her line will eventually lead to the Messiah himself.
Joshua 2 vv 15-21
Matthew 1 v 5
Rahab let the spies down through the window in the wall, then she tied the red ribbon there as a sign to them. For her own safety.

7. The story for everyone who’s ever felt inadequate. Mr Small gets a comic angelic greeting, ‘Hello Mighty Man!’ But it’s no joke. Gideon has been subversively preparing food for his people. And the creator has noticed. The little guy may be least in his family but he has sizeable guts.
Judges 6 vv 11-16
The angels appeared and said, ‘Hello, Mighty Man!’ Gideon replied, ‘I’m the smallest guy around.’ The angels said, ‘Then you’ll be perfect for doing this job.’

8. So Naomi changes her name. She is Mara now, hardened, calloused by life. Bitter. She limps home, burdened by ghosts from her past. But Ruth refuses to succumb to the pressure. She will stay till the end, even if it is bitter. She’ll be the hope Mara does not have.
Ruth 1 vv 11-22
Ruth told her, ‘I’ll go with you wherever you go, make my home where you make yours. I’ll stick by you whatever happens, through thick and thin.’

9. David’s anointed king yet here he is, smelling bad and his feet are sore. More than sore, bloodied by running all the time. His hands and face scraped from hiding in too many caves. Is he a king or a vagabond? When will he see the fulfilment of the promise?
1 Samuel 16 v 11-13
1 Samuel 22 vv 1-2
Samuel asked if there were any more sons, so Jesse called for his youngest, David. Samuel knew immediately and anointed him.

10. The royal family implodes, and upstart Absalom tries to depose his father. Power and privilege have corrupted the humble shepherd and his family. Instead of slaying giants, he’s disrespecting dad. He schemed, plotted, humiliated his father’s women. Not a man after God’s heart. The result - a bad hair day.
2 Samuel 18 vv 9-17
As Absalom fled the battle his hair got caught in an oak tree and his donkey fled, leaving him dangling.