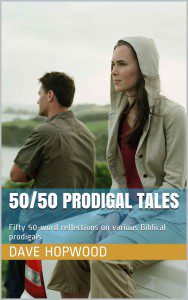 Fifty 50-word stories about various biblical prodigals and their different experiences on their journeys home. Useful for a daily reflection.

Having run away from home and squandered his father’s inheritance, the prodigal decided to go back and beg for a job as a hired servant…

1. But as his father ran and threw his arms around him and promised a massive party, the young man thought of the parties he had recently enjoyed. Suddenly he knew. He wasn’t ready. He thought he was willing to give up the past, but he turned sadly away. Maybe later…
Matthew 10 vv 17-23

2. Her father saw her coming, ran in an extremely undignified fashion and hugged her in public. This wasn’t right, surely. Then he gave her undeserved gifts and dragged her to a party. It wasn’t her scene really and before long she slipped into the kitchen to do the washing up.
Luke 10 vv 38-40

3. His father was waiting, with a party, presents and a new outfit. And out in the fields a shadowy figure watched it all with contempt. He slipped home later, packed his rucksack and then had a showdown with his father. The next morning there was an empty bed, unslept in.
Luke 15 vv 25-30

4. His mother didn’t come out. She was watching from an upstairs window. Her husband, so generous, so foolishly magnanimous. They’d laugh about this in the pubs tonight. The naïve father showing himself up, showing himself weak. But she knew. He‘d been the strong one. Faithful. Always believing in his son.
Luke 15 vv 24 & 32