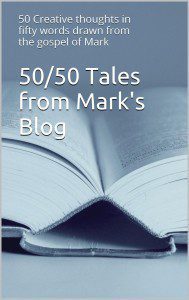 50 fifty-word extracts from the life of Jesus. Creative moments that take a sideways look at the gospel of Mark. Useful for quick and easy thought-provoking reflection.

1. The builder from Nazareth steps into the water. No sign of the tools of his trade now. His cousin glances over, surprise creasing his face. The builder wades towards him. The baptiser grabs his cousin and plunges him under the surface. The sky crackles with thunderous words. ‘That’s my boy.’
Mark 1 vv 1-11

2. It’s a sad day for the builder. His cousin arrested, the future looking bleak for him. This casts a long shadow. John’s arrest is a signal – a green light for the builder to start his new work. But there’s the faint glimmer of a red light too, a silhouetted cross.
Mark 1 vv 14-15

3. The builder doesn’t wait for disciples to come to him, he’s not bothered about protocol. He wants uncomplicated, open-minded men and women. So he takes a walk amongst the poor in spirit and soon spots a few fishermen. Before long they’ll be joined by tax collectors, prostitutes and the unexpected.
Mark 1 vv 16-20

4. Bodies squeezed like coats in a cramped wardrobe. Eager faces, eyes wide, ears straining for some good news. The builder looks up at the jagged tear in his roof. He looks down at the sprawling body on the stretcher. In two words he brings hope to the streets. ‘You’re forgiven.’
Mark 2 vv 1-5

5. Dining out is one thing, but dining out in all the wrong places is something else. Doesn’t he know how it looks? His credibility just left town. The religious elite are judging him and every one gives him 0 out of 10. The builder doesn’t mind. He’s in his element.
Mark 2 vv 13-17

6. The bridegroom looks at the crowd and tells two stories. Mending clothes and storing wine. The women and men smile and nod. These are stories they relate to, they get it. The need for a fresh start. Something that’s a little easier for the spiritually poor than the religiously rich.
Mark 2 vv 19-22

7. Hard hearts, so brittle they might shatter. Compassion long frozen out of them. Give them a list of rules and they’ll be okay. But the builder didn’t come to bring rules. He came to heal people on the wrong days. To care for those worn down by the brittle hearted.
Mark 3 vv 1-6

8. He handpicks them. Not the strong or the beautiful, not those who stalk the corridors of power or get their names in the papers. He sees the hearts, the passions, the hunger. He sees people who’ll change the world, almost in spite of themselves, learning as they make their mistakes.
Mark 3 vv 13-19

9. His mother stands in the shadows confused, tears making tracks on her cheeks. How could he do this to her and their family in public? She wants him home, wants him safe. His talk of change and the crowds applauding him. That sort of thing leads to death round here.
Mark 3 vv 21 & 31-35