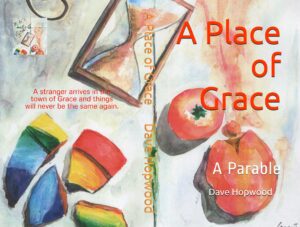 A parable and a folk tale, about a strange place not unlike any other, and a stranger who brings unusual transformation.

Prologue
David steps onto the tree stump in the centre of the town, holding up his hand for silence.
‘So, we're all agreed then?’ he says, eyeing the crowd warily. ‘That's what we'll do?’
As one, the crowd replies, ‘Yes, we're agreed.’ There’s an inevitability about the sound, as if their voices have been programmed.
David says, ‘Good. Then let's say nothing more of it.’
Paul brings on a large piece of board and paints five letters on it: G-R-A-C-E.

This is the sad tale of the town of Grace. A place full of people not unlike you and me.
There was David, the self-appointed mayor of the town, a confident, ambitious man. And Paul, the local minister of the little chapel situated at the end of the main street. There was only one street in Grace, it ran through the town, and most of the occupants lived in the houses that lined it.
David didn’t live in one of those houses, he lived with his beautiful wife Bathsheba, in a large mansion just outside the town, a place fit for someone of David's self-appointed standing. Paul was not married, but lived with his spinster aunt, Joanna, in her cottage beside the chapel. Next door to them were Jacob and Rachel and their three teenagers. Dinah, Asher and Joseph, a cocky but well-meaning lad who particularly loved his multicoloured wristbands. And next door to them, Mary, Martha and Lazarus.
At the same end of town, on the other side of the street, there was a block of flats, and there lived Samson and Delilah, a frothy-headed couple, who never talked except to fight. And above them, Maria and Rahab, who often had visitors, quite late at night.
Thomas, Peter and Judas shared the flat above them, three rather earnest young men, rebels looking for a cause. And finally, on the top floor, Miriam, Esther, Ruth and Ruth’s mother, old Naomi. And then there was Jezebel. Poor muddled mad Jezza, the girl who looked different, and sounded strange, and was not like anyone else in the town of Grace.
These were not all the occupants of Grace by any means, but they are certainly the people you will meet in this account, and the ones who left their mark indelibly upon that little town stuck out in the middle of nowhere. Theirs was a hard life, not much smiling was done. They were hard on each other and life was hard on them.

Chapter One – The Stranger.
It was another ordinary day in the town of Grace when The Girl arrived. She just planted herself beside the road and sat there playing, as if it were something she'd always done, idly and innocently, as if she was not about to shake the foundations of Grace forever.

As the sun came up Jacob and Rachel’s three teenagers spotted her, and they were not too shy about approaching her.
‘Who are you?’ demanded Dinah.
‘Yes, who are you?’ demanded Asher.
The Girl just carried on playing the game.
Dinah leant over to Asher. ‘Make her talk Asher.’
Joseph frowned. ‘Why?’
Asher shrugged. ‘Why not?’ And he pushed her. ‘Come on, tell us who you are.’
But The Girl said nothing so he pushed her again and again until she fell backward.
Joseph jumped closer and helped her up.
‘Don't hurt her!’ he said.
‘Well, make her talk then,’ said Dinah.
‘You’re not another judge are you?’ said Asher but Dinah gave him a look and he shut up.
Joseph thought for a moment, adjusting his many multicoloured wristbands as he did so. ‘Are you hungry?’ he asked. ‘We have lots of food. It's not that good, but it's okay. One day I'm gonna be rich – then we'll have really good food. Everyone will want to come to my house to eat…’
Dinah cut across him. ‘Joe, shut up, we've heard plenty about you and your stupid ambitions. Let her talk.’
Joseph wasn’t having that. ‘They're not stupid!’ he said.
Dinah sighed. ‘Yes they are!’
‘Not!’ said Joseph.
‘Are!’ said Dinah.
This went on a while, until, as they stood eyeballing each other, The Girl spoke. But not in English. They turned and stared at her.
‘What?’ said Joseph.
‘Yea,’ said Dinah, shoving her again, ‘what did you say?’
The Girl spoke again. It made no sense.
Dinah turned on her brother. ‘Joe, you're Mr Fat Brain – you translate.’
Joseph shrugged and pulled a face at her. Then he snapped his fingers.
‘Mad Jezza!’ he said. ‘She talks funny. She might know. Let's get her.’
And they ran off jabbing each other and making too much noise about it.
While they were gone The Girl resumed her game, but every so often she stopped, and glanced up at the people passing by, as if she knew their thoughts, as if she could read their minds. And though at first they all ignored her, slowly, one by one, they stopped and gathered round. And The Girl began to feel very uncomfortable indeed.
Then the youngsters returned, shouting and dragging Jezza by her multicoloured dungarees. Jezza looked frightened. They threw her towards The Girl.
‘Here! Weirdo! Talk to her,’ Asher ordered.
There is silence. Jezza looked at everyone. Then she turned and looked at The Girl. Jezza said something in a strange language. The Girl said nothing.
The teenagers slapped Jezza and urged her on.
‘Try again!’
But as she opened her mouth The Girl spoke. Jezza looked at her suddenly, then she turned back to everyone and smiled.
‘I… I… know this language,’ she said. ‘I know what she’s saying.’
‘Yea, well,’ said Dinah, ‘what does she say?
The Girl spoke again.
‘She says she’s come to see us,’ said Jezza, and she and The Girl smiled at one another.
But Dinah wasn’t impressed.’ Well, we don't know her. Tell her to go home.’
The Girl spoke again.
Jezza listened then said, ‘She says she will go home – but first she has a gift for us.’
The Girl turned and ran to a nearby tree. The people muttered and started to leave. The Girl returned with a box, put it on the floor and took out a bright red piece of fruit. She smiled proudly and held it up.
Delilah sneered and said, ‘What's that?’
The Girl told her and Jezza said,
‘She says it's a tomato.’
The people of Grace had never seen a tomato...