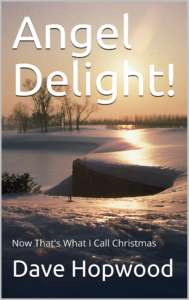 A humorous version of the Nativity told through the eyes of a bunch of angels. A Christmas resource that can be read for pleasure, or performed as readings, or acted as a drama. Use bits of it or the whole thing. Useful for Christmas services and events.

Three angels wander into a conference room somewhere in heaven. Smith and Jones are well-meaning if somewhat flippant and action-loving, Gabriel is earnest, keen and a little more experienced. He hovers in the background as Smith and Jones banter.
Angel Smith – So did you see Heaven’s Got Talent last night? I can’t believe that guy with the talking donkey won.
Angel Jones – I voted for the bloke who managed to cram a million animals into that boat the size of the Tardis!
Angel Smith – You going to the Inter-angelic FA Cup Final?
Angel Jones – What? Cherubim Wednesday verses Seraphim Wanderers? You’re kidding. I’m a Messengers fan myself.
Smith – Look lively, big Mike’s here!
The three form a straggly line as Michael strides in, tall, shiny and very much the man in charge. He walks along the line sighing and tutting as he inspects the ragged trio. When he reaches the far end he magically produces a clipboard.
Michael – Right you lot, this is a tough assignment. We have to get this right. There’s never been a mission like this in all of history. Angel Smith?
Smith – Sir?
Michael – Don’t kill anyone, all right?
Smith – Why not?
Michael – Because it’s not that kind of assignment.
Smith – Oh!
Michael – You hear me? No killing!
Smith – Not even a little bit?
Michael – Not even a little bit.
Smith – But I was allowed to kill people in Egypt.
Michael – This is not Egypt. Times have changed. You can’t go around wiping out every firstborn child.
Jones raises a finger – Sir?
Michael – Angel Jones?
Jones – What about every second-born child?
Michael – No!
Smith – Every third-born?
Michael – No!
Jones – Every fourth-born?
Michael – No! This mission is about protecting life. There are two firstborn sons and they need to make it through.
Smith – Well… can we kill their enemies?
Michael – No!
Jones – Can we bash them about a bit?
Michael – No!
Smith – Can we flick their ears and jab them in the bottom?
Michael – Listen. There will be no flicking or jabbing. You just have to deliver a message.
Jones – A message!! Is that it?
Michael – Yep. To a bunch of smelly shepherds… I mean to a collective of aroma-specific animal carers. Gabriel, you’re in charge of that particular mission. I’ll give you a list of all the other key engagements with humans that you need to undertake as well.
Smith ¬– Do we have to engage with so many humans? They have weird habits and seem to think the universe revolves around them. Plus they scratch and sweat and sneeze and spit! And they stare for hours at little slabs of glass and plastic. What’s going on there?!
Jones – Yea, and what’s with that thing where they put little paper tubes in their mouth and - get this - set fire to them!
Smith – And they eat Marmite! What’s that all about!?
Jones – For decades I never actually believed in human beings. I thought they didn’t exist. They sounded so mad!
Michael – Don’t worry. Gabriel’s doing most of the missions alone.
Gabriel – What!!
Michael – You’ll do fine. You just need to visit John’s dad, Jesus’s mum, Jesus’s dad, and a few wise men. Make sure you don’t step in any camel droppings though, I don’t know what they feed those creatures on, but it stains. Not to mention the smell. And don’t hang around too long at the face end either - those things can spit like a fire hose. Now, here are the details...

The priest Zechariah makes his way carefully through the temple.
Gabriel – Er... excuse me…
Zechariah – Aghhhhh!!! What are you doing in here? You can’t be in here!
Gabriel – Are you er…
He checks his bit of paper.
Gabriel – Zechariah by any chance?
Zechariah – We’re all gonna die!!
Gabriel – Who is?
Zechariah – You! Me! You can’t just saunter in here like this!
Gabriel – I didn’t saunter. I never saunter!
Zechariah – This is terrible. I’m too young to die.
Gabriel – Well you’re not that young. That’s why I’m here.
Zechariah – What?
Gabriel ¬– I’ve got a message for you.
Zechariah – Well couldn’t it wait?
Gabriel – No. This is the appointed time.
Zechariah – Appointed or not you’ll get us both killed. Only the chosen priests can come in here and then only twice a year. We can’t have any Tom Dick or Harry shilly-shallying around in here.
Gabriel – I’m not Tom, Dick or Harry. And I’ve never shilly-shallied I’ll have you know. So where is he?
Zechariah – Who?
Gabriel – This chosen priest chap?
Zechariah – It’s me! It’s my turn, it doesn’t come around that often and you’ve just ruined it. My life’s over.
Gabriel – I doubt it!
Zechariah – It is! We can’t just meander into the glory of God any time we want. It can be fatal.
Gabriel – Once again… I never meander. And this whole thing is about the glory of God. Now listen, Zechariah, don’t panic, but you and Elizabeth are going to have a baby.
Zechariah – What? Have you seen how old we are?
Gabriel – A minute ago you were too young to die. Now shush. This boy will bring joy to lots of people, and he will prepare folks for the arrival of God among them. He’ll be like Elijah and will soften the hearts of many. Now, don’t let him have a drink of wine, or beer, or spirits…
Zechariah – Shandy?
Gabriel – Shandy?
Zechariah – Yes, you know you can buy those cans in the corner shop with barely any kick in them at all.
Gabriel – No! No shandy! Shandy’s off. Just in case. He’ll be filled with another spirit all his life, the spirit of God. And he’ll turn many rebels back to God. Got it?...