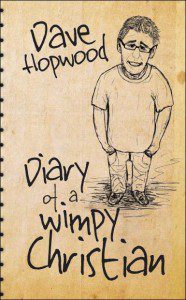 A collection of daily, humorous reflections about life and faith from a 50-something Christian man, focusing specifically on his failings, fears and frustrations. Witty, honest and inspiring. Dave reflects on his own shortcomings and failings and revisits many Bible characters along the way.

Cats, drivers, beards, ears, DIY, varifocals and sport all feature as he muses on his poor attempts to be a ‘proper Christian’, and reflects on many of the Biblical characters, including John the Baptist, Simon the Tanner, Elijah, Jonah and of course, Jesus.

Honest and entertaining, straight-talking and insightful, this is a book to encourage Christians to be honest about their weaknesses, laugh at themselves and be inspired by the stories of the Biblical folks.

Not much to do so I thought I might scribble in this old notebook for a bit. I’d had overblown ideas about using a tough leather ‘be a man for Jesus’ kind of book. Hardwearing, rugged, swaggering and impervious to the elements. Thought it might put out the impression that I’m like that. But the only available diary in the house was pink and covered in skipping elves. Kind of ironic and a few steps closer to the truth perhaps but… no. So I’m just using this one. My old school notebook. I kept it for recording wise words gained with age and maturity. There was nothing in it. Every page was vacant. So I want to go out of my way right now to state that this is not the diary of a spiritual giant, not even the journal of a spiritual pigmy. Just a few random thoughts. I’ll probably give up after a day or two. Lose my pen. Or the notebook. Or the will to live. Plus if I’m going to tell the truth I’d better keep it quiet. Not show it to

Wouldn’t want people to really know what I’m like, would I? I’m supposed to be an ‘expert’ Christian. At least I’ve always thought so.

There are just a few things I find tricky about being a Christian.
1. Worship
2. Evangelism
3. Prayer
4. Bible reading

Apart from that it’s fine really. No problems. (Think I might just scribble a little more about that later.)

There’s a new group in our church called Alphablokes. Apparently it’s all about having breakfast and curries together, and sometimes having curry for breakfast. And being real men. Tough, arm-wrestling, bear-hugging, sweaty kind of Christianity. Football, DIY, cars, camping and God. Sounds a great idea. Just one or two things.

Thought for the day: Jesus knew that food was a good way to get his friends back on board after they’d all deserted him when he was arrested. Most likely wasn’t curry but it worked.

Went to church today. There was a lot of singing. I’m not a singer really. Certainly not up there with the greats. You know, the likes of

So I find my mind drifting. And my eyes. End up watching others and wondering. Wondering if their minds are wandering. And if they’re watching me wondering if my mind is wandering. Bit of an observational cul-de-sac really. But I’m a visual person, without anything specific to look at I find myself looking at other random things. I watch the other men and wonder if they’re thinking some Alphabloke Christian kind of thoughts. Out in the wild kind of thoughts, like conquering Everest or wrestling rhinos or chasing bears or hugging hippos. Or whether some of them are like me and end up thinking about

On the music front, when it comes to singing I tend to gravitate towards the likes of

1. What’s on the radio
2. What’s on Spotify
3. Old CDs I own (everything from The Beach Boys to The Clash to Abba)
4. Whatever’s new that I pretend to like to make it look as if I’m ‘down with the kids’

1. In the car
2. In the rain
3. In and out of tune
4. When I shouldn’t (i.e. all of the above)
Today’s sermon was good, by the way. Really good. It was about… erm… a few things… like… God. I think. It encouraged me at the time anyway. Why am I like that? Hear some good thoughts, get a shot in the arm, and then afterwards can’t remember a thing. Apart from the moments when I thought I could be up there doing a better job. I remember those. Sounds terribly arrogant of course and is one of those reasons for not showing this to anyone. But I often think I should be giving the sermons, not someone else. I mean

1. I’ve got lots of opinions and ideas about things
2. I’m wonderfully entertaining
3. I’m clever with it too
4. And humble

King David was well into singing. He wrote 70 odd songs. We don’t know the tunes, so they could have been like Mamma Mia, Good Vibrations or London Calling. Or a strange combination of all three. We’ll never know. But he was all for getting folks to break into song about the full spectrum of faith. Everything from praising God for his world, to asking for help when kneecapping his enemies.
These days we tend to stick to the praising bits and avoid the kneecapping diversions. But if nothing else Biblical Dave’s back catalogue shows us we can say or sing all kinds of things to the maker of music. Pain, pleasure, praise or pedantic nit-picking. It’s all in David’s box set.

Thought for the day: if you are humble it’s best not to put it on your CV, or on a list of four things about yourself. It’s kind of self-defeating.