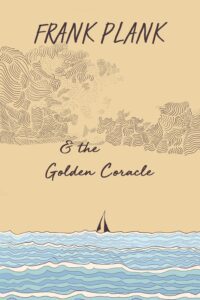 When Frank and his sister Jodie discover a little gold boat in the basement of their new home, they find it has the power to take them on a fistful of daring and dangerous escapades. An adventure for youngsters of all ages.

Frank is just an adult now, ordinary and special like all of us, but back in 1995 he and his family moved to a new life, and Frank and his sister Jodie were about to make an extraordinary discovery. Let’s go back in time…

Part One
They were in the new house. Frank and his stepbrothers and Jodie. It was a lottery-win house because Frank’s mum had won with 1-2-4-8-16-32. I know, who would have thought that order of numbers would have won the top prize? Well, Frank’s mum for one thing, but that’s not the tale we’re telling. Frank and his half-sister Jodie got together for a chat on that first day under an old oak tree at the bottom of the new and exceptionally large garden. Whatever the weather they agreed to meet there and swap stories from the day. While they were talking Jodie pulled a battered wooden box out from under a rhododendron bush.
‘What's in there?’ said Frank, his suspicions aroused already.
‘Take a look,’ said Jodie. ‘I found it in the cellar,’ she said.
Frank had never lived in a house with a cellar before. Or an attic. And this rambling place had both.
‘I found it when I went exploring down there. The place was full of old cobwebs and dusty wine bottles but there was also this, and it doesn't look dirty at all.’
‘What is it?’ Frank asked as Jodie took away the top of the wooden box and pulled back the off-white tissue paper. There were flashes of brassy yellow and glints of shimmering metal as she pulled back the wrapping.
‘It's a golden coracle,’ she said, her voice a bit hushed. ‘A little gold boat.’
And she held it up for Frank to see. It was beautiful, all shiny and polished and with little golden cords that were tied to the silk sail and wrapped around the golden mast. Three perfect oars rested on each side of the boat and the long handles were studded with tiny precious stones.
‘Does it work?’ asked Frank his eyes wide.
‘Does it work?’ said Jodie. ‘What d’you mean?’
‘Well does it float?’
‘Of course it floats, and we can sail it every day, and stow away on board and go on adventures in it.’
‘But there's no river here,’ said Frank.
‘There are no adventures either, except the ones up here,’ and Jodie tapped her temple, ‘and that's where the river is too.’
Frank scowled. ‘Sounds too safe, sailing in your head. Without real waves and water.’
‘Too safe? Too safe?’ said Jodie, her eyes wide and bright. ‘What are you talking about? There'll be storms and rapids and tornadoes and tidal waves... all of it, and it's all in there, in your brain waiting to leap out and capsize the little golden coracle.’
‘Well it won't,’ said Frank and his scowl had vanished now. ‘It won’t capsize it.’
‘Are you sure?’ said his sister.
‘Sure I'm sure. We'll sail our brilliant boat like true heroes, we'll take it where no one else can – and we'll bring it back again. We'll go on the journey of a lifetime and no one will stop us or catch us.’ They stared at each other with big, wild grins as the rain beat down and ran in little splodges and trickles down their cheeks. Then the sound of their mother cut into their dreams. ‘Frank! Jodie! Your tea's ready! Are you coming or what?’

Part Two
Monday.
Outside it was raining again. Jodie had the wooden box once more and the boat inside it. As soon as Frank reached her she took off the lid and laid the boat in the puddly grass. ‘Well?’ she said. ‘Where d'you wanna go Frank?’? Frank looked at the little gold cords and the damp canvas sail.
‘Anywhere,’ he said.
They boarded the boat at five past four and set sail. Frank took an oar and paddled out into deeper water. Jodie waded out front and pulled on the rope to give it extra speed. She was wading through wet leaves and dragonflies and tadpoles, and was soaked up to her armpits but she didn't seem to care. As soon as they were floating free she climbed in and the wind filled the sail and took them into deep water. The river wound its way down towards the sea, and the closer they got to the sea the bluer the water and the sky became. Frank took off his coat and hung it on the mast to dry. He sat in the helm and wrote in his little leather notebook.
Ship’s log, day one. Yes. This is it! This is where I want to be. Jodie and me on the gold boat with no noisy brothers and no bullies and school. Yes! We're sailing out to sea and it's all hot and sunny and we don't ever have to come back. We can just watch the seagulls ducking and diving and screaming at us, and then we'll swim and dive deep down for fish and shells. It's getting hotter and hotter and hotter and nothing can stop us now, we never have to go back...
But they did. The shouts of their mother brought them back to the garden again and they had to hide the boat and walk back up to the house through the rain and the puddles and the mud. Jodie nudged her brother as they went.
‘How's school, kiddo?’ she said.
‘Oh… well… you know,’ said Frank. ‘Okay.’
‘Any trouble I should know about?’ Jodie asked, a frown stealing her smile away.
The new kid's face flashed into Frank's head, and the thought of it brought Frank crashing back to earth. The sooner they were back on the boat the better.
‘No,’ said Frank. ‘I'll be okay.’

Part Three
Tuesday.
Ship’s log, day two. There’s a new boy at school. Keeps pestering me. Says I owe him money when I don’t. I’m sure it’ll be all right though. I hope so anyway. He’s always on his own, doesn’t have many friends. I think people are a bit scared of him. He’s bigger than most of us.