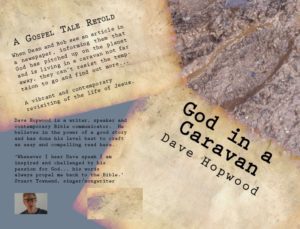 Dean and Bob can’t resist the article that claims God has arrived and is living in a caravan nearby. They follow the trail with unexpected consequences…

A short novel. A revisiting of the biblical Gospel story. Here’s a 7-minute extract…

Chapter Fifteen
Miriam left them on the doorstep when they got back to her house. When she reappeared she held out her hand, there was a purple notebook nestling in her palm.
‘Here, you can borrow this if you like.’
‘What is it?’
‘It’s the journal I kept during the time I knew him. Don’t worry, there’s only stuff about him in there, nothing personal or embarrassing. I want it back though. Look after it. It’s precious. And I mean that. But if you’re really interested in him…’
‘We are.’ Dean took it.

Dean and Bob found a chippie. Then they found a park. Then Bob found a bench and hoovered up his fish and chips. Not long after he gave up supporting his head and eased into sleep. Dean sat on a nearby wall and sat flicking his way through Josh’s sketch book. Planets and stars flew by him as the pages ruffled past, then creatures and colours and creations he couldn’t name. The guy had an imagination, you could certainly say that. The images virtually leapt from the paper as the pages gathered speed. A double page of numberless hues and shades made him stop and stare. Like a world exploding. The birth of a universe. Right here in his palms. He drank in the sight and the very notion of it made his heart race and his head spin. How could someone sketch like this? For relief he closed the book and laid it on the wall, picked up Miriam’s journal. The thing was awash with delicate writing, veins of ink spiralling across the page, ignoring the lines and doing its own thing as the phrases told their tales. A literary heartbeat, dancing across the paper.

'Met a guy called Josh today. He was down in the market and people seemed to love him so we stopped to see what the fuss was about. He was friendly, chatty, but then started spinning this funny tale about a farmer out in his tractor not paying proper attention to where he was scattering all his seeds. The kids laughed as he described with sound effects the tractor hissing and popping and flinging seeds right, left and centre. In the mud, in the hedge, all over some picnickers. Sam laughed his head off and threw in some of his own suggestions. I was worried Josh might not welcome the interruptions, but he picked them up and ran with them. Put them into the story. Seeds in the stinging nettles, in the sheep’s ears, in the cow pats, on someone having a wee in the hedge. Inevitable that a story involving Sam would end up with that sort of thing. But then Josh flipped it on its head and said some of the seed which seemed to get lost actually didn’t, instead it started growing! Even in those daft places. Plants and corn and bushes grew up here, there and everywhere he said, in spite of the fact that some people told the farmer off for being wasteful. And then he said, that he was a bit like that. So watch out for seeds flying everywhere and things starting to grow. And he looked right at me when he said that. Weird. Nice guy though. The kids definitely fell for him.'

Dean flipped the page and read on.

'Josh came round here! I opened the door and there he was, outside in the street looking lost. I’d worry he might be a stalker but… no. Not him. He doesn’t seem the type. Although that sounds naïve I suppose. I try to be careful about who I invite in but I ended up making a cuppa for him in the kitchen. Sweet guy. He said he’s on a mission of sorts. I asked him about the farmer story and all he said was, ‘Yea, that’s the one.’ He asked me about Rick, which freaked me a bit, because how would he know about him, unless he’s been checking up. In the end I told him a few things. I hate going back over the crap. And I’m sure he could see that as well. When I sort of mumbled to a grinding halt he said something about lifting the burden off my shoulder, and swapping it for another kind of burden that was good. It doesn’t look much when I write it here, in fact it looks weird to me now, but it made me feel really good at the time. Really good. Lighter. Free...'