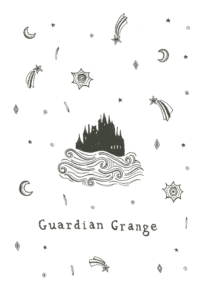 An escapade that is totally out of this world. Normal, Tiberius, Ocacia and Ararnia are no ordinary youngsters. When they enrol at Guardian Grange they embark on a whole new life of training, missions and adventure. Flying, invisibility and combat are just a few of the skills they begin to acquire. And along the way they encounter strange events and dubious characters. Before too long they are sent on a world changing mission, will they be up to the job?

The helicopter hovered over the water as it joined the queue of airbuses waiting to land. Normal looked out of the window at the school that would be his home for the next few years. Next to him Tiberius leant across, looked out and gave a low whistle.
‘Hope the food’s good,’ said Tiberius, and he grinned at Normal and patted his own ample stomach.

Normal McCloud may not sound much like the name of an extraordinary person, but that’s often the way. The dullest of names can conceal the most incredible of people. Actually, calling Normal McCloud a person is a little misleading, but it’s a useful word for this tale, as is boy and girl and pupil etc. But we’ll come back to all that.

Normal lived in a house that hardly features in this story, so it doesn’t matter too much at the moment. The building that does matter was called Guardian Grange. It was a massive Gothic sort of school, with huge bay windows, tall towers, and at least four floors. It stood on its own island, in its own grounds, two hundred miles across the water from Normal’s house. Before going there Normal had left home each morning and walked to Halo’s Preparatory School with his big friend Tiberius. Tiberius wasn’t big in the sense that he was any older than Normal, they were the same age, but he was big in that his body, arms, legs and feet were just that little bit larger. He was a solid kind of boy, and strong too. The strongest boy in Halo’s Preparatory School. All of Tiberius’s family were tall. His dad was a big wrestler of a guy. In fact Tiberius looked very similar to his dad, same blond hair, wide eyes and round squidgy nose. Same square shoulders and wide chest. Just smaller, as if someone had left a copy of his dad in the rain and he’d shrunk down to a smaller size.

Normal and Tiberius were both extraordinary, they just didn’t know it, as so many youngsters in their world didn’t. They just went to school, messed about as friends, and claimed they were going to be heroes one day. But the day they left Halo’s Prep School and began to prepare for their years at Guardian Grange everything began to change and it set them on the road to extraordinariness.

As the circular landing pad cleared below and the helicopter lowered into the grounds of Guardian Grange, Normal had a strange reaction. He felt as if his whole world was going over speed bumps, as if he’d been put inside a biscuit tin and a kind of giant was shaking it. There was something about this world that felt very different. He and Tiberius had looked at pictures of the place in the past and talked about how amazing it looked, a little scary too, but full of mystery and possibilities. Now here they were, and it all felt a bit strange.

There were all sorts of tales told about this big Gothic monstrosity of a school. About who was supposed to live there, who might be imprisoned in the dungeons, if there actually were any dungeons, and who might be locked up in the attic, if there actually was an attic. And what went on late at night when one or two lights could be seen burning in the windows on the top floor. But now Normal and Tiberius had packed their bags, waved goodbye to their families and crossed the border into the place itself. Now it was no longer about wondering and imagining and telling wild stories. Now it was about a new kind of school, in a new kind of world. And Normal felt a little bit worried about that.

As they climbed down from the helicopter and hauled their bags from the luggage compartment a couple of older boys sauntered up.
‘Hi there underlings,’ said one of them, a black-haired boy with his hair sticking out all over the place. ‘My name’s Waggett, this is Podium. We’re the welcoming committee. Come on then. Keep up.’
And without offering any help whatsoever the two older boys turned and sauntered across the grass and up the three very wide stone steps that led to the main door into the Grange. Normal and Tiberius looked at one another. Tiberius rolled his eyes and shook his head. He grabbed Normal’s bag along with his own and threw one over each shoulder, he winked at Normal and they followed the two other boys inside.

Inside the building the first space they encountered was a huge circular hall with marble pillars, a sweeping staircase and a massive vending machine, offering everything from caramel and rhubarb milkshakes to stew and dumpling smoothies.
‘Nice!’ said Tiberius, when he spotted the drinks machine.
Waggett and Podium were already halfway up the broad, winding staircase. Waggett glanced back at them and gestured up the stairs with his head. They followed. They went up three floors to a door that led down a narrow corridor. The corridor was lined on both sides with a myriad of variously shaped doors, like something out of a fairground attraction. Waggett took them down this corridor and stopped at one of the many rooms that led off it. He turned the handle and threw the door wide.
‘You sleep here,’ he said.

The two older boys had taken Tiberius and Normal to a small bedroom. The place had beams across the ceiling, oak panelled walls that all looked lopsided and a wooden floor that was crooked and sloped away from the door. Waggett pointed to a rickety sink, a wobbly desk and two crooked bunks...