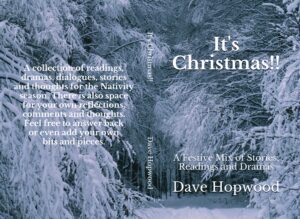 A collection of readings, dramas, stories and thoughts for reflecting on the Nativity. Also contains lots of space for you to record your thoughts and reactions, and maybe add your own bits and pieces.

This book is a bit of a mixture. It contains stories, dialogues and dramas for revisiting the nativity story in a whole host of ways. Written over many moons, with some of the pieces used in many ways. Some are humorous, some more serious, but hopefully all are thought provoking. The pieces here could be presented to others, but this is also a book for personal or group reflection. That’s why I have dropped in the Your thoughts pages every so often. I hope that these creative pieces will help as you reflect on another Christmas and its meaning for the rest of the year. Feel free to scribble your reactions, to answer back, or to create your own pieces.
At the time of writing we are still stumbling through the terrible time of Covid 19. This may mean sharing these pieces in some way online, via Zoom or Facebook or the like. Or filming them to post on YouTube. Two of these pieces, Christmas Crowd Story on page 116, and A Christmas Journey on page 137, were designed to be experienced outside. This may be possible, but you may find still other ways to share these stories. And that said, please feel free to cut up any pieces and tweak them in any way that suits you. If some are too long then just use a chunk. Also, some cultural references date over time so do feel free to adjust these and substitute anything more topical.
An apology. As these pieces were written over many years and for various events, there is some overlapping and repeating of ideas. And jokes too! So I apologise now, but I thought it worth including all these as they do represent a breadth of ways and means of retelling the good news of Christmas.
Special thanks to Dave Broughton for his An Epiphany Drama piece on page 155. And also to Martin Purnell for proofreading this book.
So without further ado let’s zip over to a glamorous occasion in a big building somewhere, for the annual Prophets’ Award Ceremony…

Imagine a gathering of Old Testament prophets, meeting because one of them is going to receive a top award.

Isaiah: Ezekiel! Welcome to the 423rd Annual Prophets’ Award Ceremony. How are you?
Ezekiel: Don’t you know?
Isaiah: Hang on…. (Puts fingers to forehead) Er… yes… I’m just getting a picture of a giant blocked nose covered in green and orange slime… you’ve got a bit of a head cold and… your troublesome catarrh’s come back.
Ezekiel: Exactly. You haven’t lost your touch.
Isaiah: All the big prophets are here. I think you know most of them. Amos is over there, and Deborah, Anna, Mary, Micah, Daniel, Miriam, Joel and… Ethel.
Ezekiel: Ethel? I don’t think I’ve read your book.
Isaiah: It contained some… er… unusual prophecies.
Ethel: What d’you mean? I foresaw the rise of a certain star every Christmas.
Isaiah: Yes… but you were thinking of Cliff Richard when you said that.
Ethel: Yes. And I predicted that the wise men would come.
Isaiah: Yes. But you named them as Ant and Dec.
Miriam: And I’m not sure if they count as wise men.
Ethel: I also predicted many important life-changing prophecies.
Anna: Yes – you foresaw the rise of Strictly and Bake Off.
Micah: But sequins and soggy bottoms are hardly up there with some of the significant things the rest of us saw, are they?
Deborah: Exactly. Micah spotted the fact that the Messiah would be born in a tiny insignificant backwoods town – Bethlehem of all places. That’s a bit like Wayne Rooney going to play for John o’ Groats.
Mary: Do they have a football team?
Deborah: Exactly!
Daniel: And Malachi foresaw the coming of John the Baptist to set the scene for the Messiah – that’s hardly up there with spotting that Zoe Ball would do the Radio Two breakfast show. Is it?
Miriam: I wonder who’ll get the Award for best prophet this year?
Daniel: The word on the street is that Isaiah’s got it all sewn up.
Isaiah: Well I don’t like to make a fuss…
Amos: Oh come on, you saw the lot… lions and lambs, the virgin birth, and you coined that list of names – Wonderful Counsellor, Mighty God, Everlasting Father, Prince of Peace. Now, that was very good.
Isaiah: Oh it was nothing really.
Anna: Shhh! They’re about to announce the winner.
Daniel: How do you know?
Anna: How d’you think I know? I’m a prophet.
Announcer:
And the nominations for the best prophet are…
Isaiah – for that speech about lions and lambs, the virgin birth, and that list of names he coined.
Amos: Told you.
All: Shh!
Announcer:
Ezekiel – for the Valley of the Dry Bones and walking around with no clothes on for an awful long time.
Ezekiel: It was quite chilly.
All: Shh!
Announcer:
Mary – for the Magnificat.
Anna for a prophetic life of patiently waiting.
The three wise men – for their strange and prophetic new baby presents.
And Ethel the Oracle for a whole host of weird and wonderful sayings.
Ethel: That’s me!
All: Shh!
Announcer:
And the Award goes to… Ethel!
Ethel: Me? Wow! How lovely! Thank you! (She accepts the Award)
Miriam: What?!
Ezekiel: I can’t believe they gave the Award to Ethel! Who could have spotted that coming?
Isaiah: Well all of us – seeing as we’re all supposed to be prophets!
Ethel: I can’t believe it really! I don’t deserve it!
Joel: It’s because we’re in a new age now.
Miriam: What do you mean?
Joel: This is the way now. The door’s wide open. The gifts of God available for everyone. Sons, daughters, women, men, grandparents, children. Visions, dreams… we’re all part of it.
Amos: Can’t be right surely. I’m gonna call my lawyer…
All freeze
- - -
At Christmas we often read Isaiah’s prophecies, from chapters 9 and 11 of his book, but the Old Testament is full of references to the coming king. Even going as far back as Abraham, who was told his new miracle family would be a blessing to every family on earth. How? Through his descendant line which would lead all the way to the Bethlehem child.
- - -
Your thoughts.

It’s worth bearing in mind that following our calendar, Mary’s Christmas actually kicked off in March. And we get flustered when Christmas decorations appear in Tesco in October!! After years of carol services and nativity plays it’s easy to imagine that the angel appeared to Mary on the first weekend in December, just in time for her to have a Christmas baby. But of course this was a much longer tale. So here’s a reflection from the point of view of the slowly growing child that Mary was carrying for nine months.
- - -
Becoming Flesh (Part 1)
A rhythm.
He can hear a rhythm.
One beat after another.
Ba-dum ba-dum ba-dum.
A heartbeat just a little slower than his own.
Comforting, reassuring, reliable, as he makes this voyage, an exile of sorts, sailing in this amniotic sea, on his way to another world.
Cramped, confined. He was destined for a bigger space than this. A bigger world.
And sounds, so many sounds.
Clangs. Bashes. Sighs. Laughter.
The voices muffled, coming from all around. Loud, quiet, some going on and on.
Words-words-words-words, words-words-words-words, words-words-words-words...

Today she seems happy, and his world expands when she relaxes.
He sways a little, she must be walking, taking him somewhere.
Familiar greetings ring out, voices warm and welcoming, the sound of smiles.
Then silence.
He feels his world tighten, constrict a little.
The voices change, becoming shocked, jarring, angry growls.
His world tightens again. She doesn’t like it, she recoils, he recoils too. Just a little.
Voices grow louder still.
Questions, questions, questions.
Sharply asked with no pause for a reply.
Her heartbeat is going faster. Quickly, quickly rapping out its urgent, snappy rhythm.
Ba-dum ba-dum da-dum ba-dum da-dum ba-dum da-dum ba-dum da-dum ba-dum da-dum.
He doesn’t like it.
Where are those soft smiling voices now?
A sob and he starts to sway again, she’s moving quickly, the muffled voices fade away to nothing.
Quiet.
The sway slows and stops.
A little bump as she comes to rest somewhere.
Another sob or two, and then another sound.
Music. He likes music. Singing, she’s singing. That’s better.
A peaceful song, he can feel her relax again, and the song takes him to another place.
The dawn of time, ancient, ageless.
For a moment he is no longer in that confined sea, but in an endless, bright place of space.
Stars spark up from nothing, angels dance, his Father speaks, sing-song words of wonder.
Planets come to life. Dust piles become people. There is light, laughter and splendour everywhere.
She stops singing. He is suddenly back again, on that amniotic sea.
And he senses something, this world will soon pass. He is going to leave it behind.
Enter another place, where he will have to learn again.
How to be, how to live.
And he will at last see her, face to face.
The heartbeat, the mother who is carrying him.
- - -
Becoming Flesh (Part 2)
There has been more anger, more growling, he feels it as she feels it.
Different voices now, and different kinds of movement, as if she has been taken hold of, moved around by others.
Each time she slips away, moves quickly and sends him swaying, though he is bigger now, and has less space.
And he is getting to know another voice, at first angry too, raised, questioning. Like the others.
But not so much now.
He is getting to know that voice well, perhaps a special voice to her.
There have been many conversations.
And little by little that familiar voice has changed. Softened. Sometimes there is even the sound of smiling in it.
He sometimes feels squashed when he hears that voice, and another faint heartbeat, slightly out of sync with hers.
Ba-du…ba-du…ba-du… ba-du…
The two heartbeats bumping up against one another...