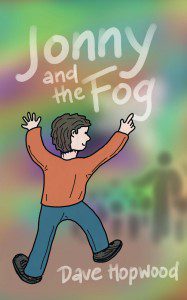 A totally new, action-packed retelling of the life of Jesus. Jonny Retro dreams about floating up through his bedroom ceiling one night, and finding himself in a completely empty world he begins to make things. Fresh, exciting and inventive. A completely new take on an old, old story.

Dear Dave
Your Jonny and the Fog book was great. It was really exciting and fun. I think it was very unusual and I wondered why they went to the volcano. It took me about 9 days to read, and it was really gripping!
from Nathan (aged 9)

One night Jonny Retro had a dream. As he lay on his back staring at the little blue and green patterns on the ceiling, made by the rotating Star Wars lamp beside his bed, a strange thing happened. He began to fall asleep, but not in the usual dreamy, dozy, slowing down kind of way, where his eyelids got heavy and he dropped whatever he was reading and just rolled over and tugged the sheets round himself. (Duvets always made him sneeze.) Instead it felt as if he was still awake, more awake than ever, as if he wasn’t asleep at all, and it was as if a door opened in the ceiling and he could step through the gap onto an invisible ladder and climb right through the ceiling and walk into a whole new world.

It was dark, very dark. At first he just thought the bulb had blown on his Star Wars bed lamp. But this was a different kind of darkness. Not frightening in any way. It was an unusual, warm kind of darkness, the kind of darkness where it felt like Jonny’s friends had planned a party for him and were just waiting to jump out from behind the sofa with a massive pile of presents and a big cake. Jonny walked around in this darkness for a while. He had never liked the dark, he usually imagined all kinds of monsters waiting there to attack him. But for some reason he just knew there were no dangerous monsters hiding here. He waved his arm in the air and a very strange thing happened. It was as if he could cut a slice in the darkness, because a little line of light shone through where he’d waved his arm. He swirled his hand in a circle and cut a whole ring of light in the air in front of him. The darkness was like a big, warm pie and he could cut big chunks out of it.

So that’s what he did. He walked around slicing squares and triangles and circles, and then he started picking them up and rearranging them like a huge jigsaw. Lots of portholes and windows of light started appearing, and not all the same colour. Instead every kind of colour and shade. Blues, greens, yellows, reds, oranges, maroons, pinks, purples, mauves and other colours he’d never imagined before.
Some of the colours looked strange and made Jonny laugh. And that gave him a shock, because his laughter sounded really loud, as if he was shouting in a massive valley. The sound made everything rattle and shake and bits of the darkness began to crumble and fall onto the floor, like crumbs off a giant biscuit.
He yelled as he jumped out of the way to dodge the avalanche of huge crumbs, and as he yelled the noise made more blobs of darkness come crashing down. So he shouted again, and again, and again, and with every shout another blob fell off. Longer words made big slabs of light appear as a big slab of dark popped out, shorter words made little chunks of light appear. He experimented with lots of the words he knew, shouting them all with a huge grin sketched across his face.
‘Pterodactyl! Discombobulate! Gongoozler! Braggadocio! Scalextric!’

After a lot of shouting and crashing Jonny found himself completely surrounded by coloured light.
It was obviously a very different world to the one he was used to. He lived at 72 Dagenham Drive, in a house that was small and in a row of houses which all looked the same. The paint was peeling off the doors and windows, and the road outside was always full of parked cars. Dogs were always barking, kids tussled in the street and you could usually hear the wail of ambulance sirens mixing with the chimes of ice cream vans. And sometimes it got confusing and you couldn’t tell whether it was time for a Magnum or a broken leg. But this world was not like that.
Colour and light pulsated everywhere, swirling around like a multi-coloured fog, and this fog wasn’t wet and cold and clammy like an early morning in February, this was a warm, glowing kind of fog, buzzing with life and colour. Swirly clouds of it kept coming up to Jonny as if they were waiting for him to do something with it.
They even formed a queue.
‘They look like people in the queue in the supermarket,' Jonny thought. 'It would be weird if fog could talk.’
‘What would we say?’ said a voice.
Jonny leapt back and looked all around. The voice was rich and deep, like the sound of a tuba blowing a low note.
‘Hello?’ said Jonny.
‘Hello.’
‘Hello.’
‘Hello.’
‘Hello.’
Other voices started to say hello and the bits of fog in the queue began to wave at him. Some of the voices were loud and deep like a brass band, some were soft and gentle like the sound of his mum sighing after a hard day. Others were squeaky like a mouse scuttling along the skirting board or creaky like an old door opening.
‘You can speak!’ said Jonny to the line of foggy shapes.
‘Well you said we could!’ they replied.
'What else d’you want us to do?’ said one of the squeaky voices.
Jonny had to think.
‘I’d like you to… sit down,’ he said.
Crash! Flump! A hundred foggy shadows fell to the ground like a huge pile of coats being thrown onto the floor.
‘Get up!’ he said and they all jumped up again.
‘Sit down!’ said Jonny. ‘Get up! Down! Up! Down! Up! Down! Up!’
Jonny was starting to enjoy himself.
The foggy shadows shot up and down like yoyos as he called out the orders. Then one of them, a soft sighing one, said,
‘D’you mind I think I’m going to be sick - all this getting up and down…’
‘Can fog be sick?’ said Jonny.
‘If you want it to,’ said the fog.
Jonny gave a cheeky grin. ‘Go on then,’ he said.
And the place was filled with one huge ‘Bluh!’ and lots of multi-coloured sick went zooming round the place. Fortunately foggy sick was not like Jonny’s sick, it didn’t smell for one thing and it looked fantastic, like a huge river of gold, silver and scarlet tinsel, swirling round his legs and creeping into his socks. He laughed and shook his feet.

‘Stop! No more being sick!’ Jonny said.
The gold and silver and scarlet tinsel piled up into a huge, single, shining statue. It stood up straight like a massive, glimmering action man. About two metres tall. Jonny went up to it and said, ‘Wow! You look cool.’
‘Thank you,’ said the statue and the voice sounded like jangling music, like someone strumming an electric guitar.
Jonny held up his hand.
‘High five!’ he said.
The statue raised a silver hand and slapped it against Jonny’s.
‘Who are you?’ said Jonny, his eyes wide.
‘You tell me,’ said the figure.
‘Er… I know, I’m going to call you Mr Fog. No. Fog Legs. No… I know, the Fog Prince, ‘cause you’re made of fog and you look like a sort of prince wearing gold armour.’
The Fog Prince nodded. He seemed happy with that.
‘What shall we do now?’ the prince asked, and some of the other foggy figures came up to see what Jonny was going to say.
Jonny looked around. Everything went quiet and still. No one moved. Jonny had a think. He turned around on
the spot and thought about what to do next.
‘Hurry up,’ squeaked one of the voices.
‘If you can really do anything…’ Jonny said.
‘We can!’ they all said.
‘Then let’s make a really exciting place. I’ve always wanted a big adventure park in my garden, with lots of sunshine, and lots of tropical plants and massive trees to climb, and dolphins you can swim with and wild animals you can ride on, and dinosaurs you can chase, and bugs you can catch, and creepers you can swing on, and two summers a year, one long and one short …’

Before he could finish the whole place started buzzing with things happening. The foggy shadows zoomed here and there, round his head and between his legs like dragonflies on an important mission, and as they moved things began to appear from nowhere.
The sky over Jonny’s head turned bright blue, and he found himself standing on a cliff edge, and water began to appear below him, splashing against the rocks. The Fog Prince looked up and snapped his fingers and a tiny speck of dust appeared in the blue sky. The speck got bigger and bigger as it fell towards them. It was no longer a speck but now looked as big as a rock.
‘Look out!’ yelled the prince and he and Jonny leapt backwards out of the way as a huge seed fell out of the sky and landed with a loud ‘Plop!’ on the cliff top right in front them. The ground began to rumble and little cracks started to appear which then turned into big cracks and with a sudden flump sound the top of a tree punched its way through the surface of the ground and started shooting up and up into the air. It was like a giant worm wriggling its way out of the earth. Suddenly seeds started falling all over the place, the Fog Prince and Jonny were leaping and diving around, trying to dodge them as they crashed into the ground in great clouds of dust. The seeds disappeared for a second, then came snaking up out of the earth as huge trees.
‘Let’s climb one!’ said the Fog Prince, so he and Jonny raced each other up two huge palm trees, that stood side by side.
‘First one to get a coconut is the winner!’ called the prince.
Jonny climbed higher and higher, his knees scuffing against the rough bark on the tree. He could see the Fog Prince out of the corner of his eye, he was a very fast climber. Jonny often climbed the tree in his grandparents’ back garden, but it was nowhere near as big as this one.
‘Got one!’ called the prince and he grinned at Jonny from the top of his tree waving a coconut.