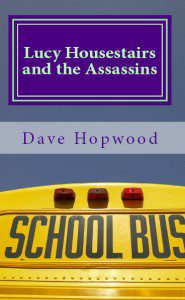 I first met Lucy on a train travelling to her aunt’s. Not me, I wasn’t travelling there, she was – I didn’t know her aunt, I was going home. It was the Easter holidays you see, and I was going to stay with my dad out in the country. He’s got a whacking great house with a river running along the bottom of the back garden and a meadow beyond that which is perfect for playing football and sunbathing. Anyway, back to Lucy… she was a bright, wild-looking girl with ragged, shocking red hair and green eyes that flashed like traffic lights whenever a good idea struck her. She told me that this happened a lot, good ideas seemed to rain down on Lucy Housestairs a bit like raindrops on the rest of us on a wet Friday. Funnily enough it was actually a Friday when I met her. Not wet though, a beautifully mild spring evening in early April. We sat opposite each other in a plush blue and white railway carriage. The old fashioned kind where you had your own compartment, with a sliding door on one side that led out onto a corridor, and an exit door on the other. Pretty posh really, except for the old Coke can we could hear rolling about under the seats, rattle rattle. It never seemed to stop for longer than a minute and it punctuated our conversation at regular intervals. It was Lucy who began the conversation, being a fairly quiet sort of guy myself I’m never one for diving into conversations with complete strangers. But not Lucy Housestairs, oh no, she waited until the train pulled out and I had this gleaming new paperback on my knee, (it was so new it still had the smell of the printers about it) then, just as I was thinking about getting into the book she waded in with her life story.

She was twelve but said she had felt older all her life. Born in a large detached Georgian house somewhere away from the smoke and the traffic she had suddenly been thrust into normal bustling city life when the recession had forced her father to sell up and move closer into town. In a strange sort of way this had appealed to her. The streets may have been littered and crowded but where there were crowds there were people. And where there were people there were lots of opportunities. Lucy knew from day one, so she told me, that she wanted to be an agent. Not for a catalogue or Tupperware. Oh no. She wanted to be a spy. Her mother had died when she had been only nine and, old before her time she had done her best to look after the house and her father, in between a frantic school life. At the time she met me she was considering dying her hair green and having her nose pierced, but she was acutely aware of peer pressure and didn’t want to be seen to be merely conforming. She asked my advice on this and all I could think of in reply was to say that she’d probably need an awful lot of hair dye to mask her natural colour. She considered this then laughed. Then she told me the most extraordinary of stories.

Three weeks previously her school had burnt down in a freak accident. Well, in Lucy’s words it had been barbecued. Talking of Lucy words, she had several of her own peculiar phrases; at least they were peculiar to me. Boys were generally referred to as twollops, seriously good things were seen as wellcrickle and anything bad was known as stumdugg. In Lucy’s world girls were most often wellcrickle, while the male of the species was all too frequently seen as stumdugg. Extremely stumdugg in fact.

“Well, no one knows what happened,” Lucy said as she told me about the fire. “But we all had our own ideas, I mean, Mrs. Claverham, the head, she told everyone it was the electrics, but I reckon it was spontaneous combustion myself, either that or gun smugglers. Stoogie told me about them. They’re well stumdugg.”
Stoogie was Lucy’s cousin and not the person you’d most like to meet at midnight in a dark alley if you were all on your own and carrying a lot of money in your back pocket.
“Stoogie’s not a criminal or anything,’ she said, ‘he’s just a major twollop. I mean, a premier league twollop. Why can’t boys be like girls?”

It was not easy for me to answer this question, particularly as I fell into the category of being a twollop myself. Lucy then went on to explain that the fire had taken place just four days before the Easter holidays, so the solution was a simple one. Costly, but simple. The holidays were extended by four days while the builders moved in.

“Wellcrickle!” she said with her green eyes blazing like wildfire.
“You’re not into school then?” I asked her.
She considered this for a moment then said, “It has its uses.”
I was pleased to hear it.
“I mean, without it you wouldn’t meet any twollops, and you need time to adjust to them don’t you? You need time to realize just how stumdugg they are.”
“Do you? Well yea, I s’pose you do but that’s not all you learn about at school, is it?”
“Oh no. I’ve learnt about lots of dodgy things. I guess I could be learning a lot more, but we keep having to go to lessons and that interrupts your education.”
I dreaded to think what education Lucy was picking up between lessons. One thing was for sure, it wasn’t like mine, and was probably stumdugg on an epic scale.
“So what did you do with your extended Easter holidays?” I asked her, hoping to change the subject.
And now she smiled. “Assassins,” she said.

And there the adventure had begun.