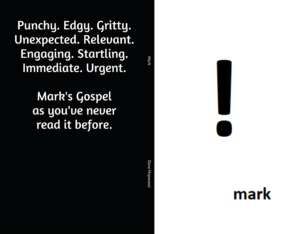 A re-imagining of Mark’s Gospel, chapter by chapter.

‘What a FABULOUS book. So brilliantly written. Your book brings the gospels SO alive and makes one see how amazing Jesus was and why everyone followed him with such zeal.’ Katharine

He glances at the man, looks away then looks back. Looks away, then looks again. Again and again. The place is full and there are plenty in here with the sour juice of judgement pooling in their mouths, their sharp fingers pointed and ready with the jab of criticism. He can sense them willing him to commit a public misdemeanour. He glances at the man again, and this time begins to move to the front of the synagogue. All eyes move and rest upon him. He beckons, gently, not forcibly, invites the damaged man forward. Understandably the man is cautious, his feet dragging heavily as he moves.
Jesus surveys the crowd, senses there is hope here, as well as curiosity and the bitter chill of reproach.
‘What do you think?’ he says, ‘today is the Sabbath, you know that, but is this a day for grace? For healing? For compassion and kindness? Or is it a day for harming in the name of rules? Does the law permit us to put energy into making lives better rather than worse?’ He waits, the room is heavy with anticipation. No one says a word and a flash of anger shows in his eyes. His face creases with frustration and sadness and he makes no attempt to hide it. The moment passes and he turns to the man, who recoils a little. ‘No need to worry,’ Jesus says, his voice gentle, ‘I’m on your side.’ And he reaches out towards the man. ‘Hold out your hand for a moment and stretch the fingers.’
‘I can’t.’ The man’s voice is barely audible, the crowd have to strain to catch it.
‘You can now, please, stretch out your hand. It won’t hurt. I’m on your side.’
There is a gasp in the room before the hand is even fully outstretched, already the dead fingers are flicking and twitching, something they’ve not done in years. Jesus holds up a flat hand and the man presses his against it. More gasps. But not enough to cover the sneers. Jesus closes his hand around the man’s and they embrace for a moment. But the religious experts are already slipping out of the doorway in search of a dark corner for their toxic plotting.

The boat’s good and ready, Simon’s standing beside it, looking beyond Jesus to the crowd streaming towards the water.
‘I’d better get in, quick!’ Jesus mutters and he throws himself off the shore, while Simon pushes away from the dry land.
On the water they’ll be safer, the crowds are so big now and they press in so hard there’s a danger that some will be toppled, crushed even. John trundles through the shallows and climbs in.
‘So many!’ he gasps. ‘Where will it end?’
‘They think you’re gonna throw out the Romans,’ Simon says, and when Jesus does not reply he adds, ‘are you?’
‘My kingdom isn’t like the kingdoms of this world. I have not come to usher in a clash of armies.’
‘No,’ says Simon, ‘but look at the miracles you’ve done. That’s why this lot are here. You could be like Moses and throw Pilate and his thugs into the sea.’
On the shore the people hold up sick children and twisted limbs. Some make efforts to wade to the boat but John and Simon quickly spot this and row further out. Another boat has set out on the water, but it’s only James, Andrew and Levi. As Jesus stands and tells his stories the people call out for change and healing. Cries litter the air as some experience a miracle or two. A woman with ragged hair and filth-stained limbs fights her way into the lake. Blood seeps from her chewed lips and her bruised eyes are the colour of poison. She begins to rant about Jesus being the Son of God but he holds out a calming hand and silences her. Too much fuss, too much truth-telling of this sort and the Romans will be riding up with their crosses and chains. The woman freezes for a moment then drops into the water. Jesus and John pitch over the side and lift her before she can drown. She stands up, blinking and gasping, but the gashes in her lips have gone and much of the blood and filth has been washed away. Her eyes are suddenly bright and clear and Jesus smiles at her. ‘Go home in peace,’ he says, ‘start again.’