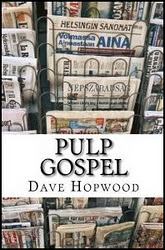 A gripping, action-packed read, retelling the Bible for adults.

Do You Want Fries With That?

The sheep and cows and doves are strutting their stuff. They’ve got lots of friends. They feel very confident indeed. The locusts feel good too. Fourteen of every kind of chopping, cutting, hopping, dissecting, snipping-in-two, nibbling, chewing and spitting out locusts. Lots of them. Whole gangs. They’re happy. They’re in the majority, this is locustville right now.
Whereas the pigs and the lizards and the bats. They look well worried. An argument breaks out.
‘Why’s there only two of us and fourteen of you?’ say the pigs.
‘Get over it,’ sneer the cows, ‘you’re just not that important.’
Noah appears.
‘Right you lot you’re probably wondering why there are only two of some of you. Yet fourteen of others.’
No… No, no, no, no. Never crossed our minds. Not at all.
‘Well, I have good news and I have bad news. Oh and then even worse news. Which would you like first – the bad, good or very bad?’
They decide to start with the bad – somewhere in the middle of the scale.
‘Well I’ve been chatting with the almighty, you know, the one who created all of you lot… and well, I think we’d all agree he was pretty clever wasn’t he? I mean, how many different kinds of locusts would you have thought of? Yes, that’s true, I’m not sure that we really need so many different kinds of locusts… but… yes and I’ve never understood the purpose of wasps. But that’s not the point. The point is – it’s gonna rain. For a long time. What’s rain? Well, water is gonna drop out of the sky on your heads. Yes, now would be a good time for God to invent the umbrella, I agree. But he’s not. Instead he’s invented me, and I’ve invented a boat.’


I work at a place which is awash with special diets. Non-dairy, wheat-free, gluten-less meals are usually on the menu somewhere. We haven’t yet served up snake and chips, lizard lasagne, bat bolognaise, grilled gecko, maggots and mash, badger and beans, stir-fried spiders, pickled pelican, raw worms or spaghetti hoopoes. But you never know. (The only special diet I have is nothing too green that might put a grin on a rabbit’s features.)

How did Noah know? I mean, it was Moses who got all the dietary details and culinary small print on that momentous trip up the mountain. Not Noah. He didn’t have the ninth commandment, or the previous 8 or the hundreds of clauses, amendments, sub-sections, by-laws and strict mold-avoidance rules that followed. So how did he know about the ban on paws and slithering when it came to aquatic Ready Steady Cook? (Now that’s an idea for a programme, contestants take a sea voyage aboard a huge boat surrounded by wild animals while having to prepare a meal with kosher ingredients.) When Noah surveyed all those animals and had to divide them into doubles and sevens how did he know?

Did he have a hotline to God? Did divine sheep dogs come down and herd them all for him? One thing’s for sure, Noah clearly knew stuff about God that we’re not told. We talk a lot about intimacy with God today but at times it seems as if those pre-Jesus guys knew God a lot better than us post-Jesus people. They certainly had more nerve, more determination and weren’t afraid to wrestle, haggle, debate and argue with the Boss.

I recently met a relative of the airman who first cut through the soil to escape from the underground tunnel at Stalag Luft III. This lady was about to go to Germany for a special commemorative event. It meant a lot to me because I grew up loving the film about this true-life escape story. One of those life-defining movies, one of those pictures that made you what you are today. The Great Escape.

My earliest memory of hero worship featured Steve McQueen, he was great-escaping on a motorbike, trying to outrun those pesky Germans and hurling himself at barbed wire fences with a vengeance. Even to this day when I see that scene I’m still on the edge of my seat hoping he makes it this time. It was the scenes in the camp that really hooked me though. And surprisingly enough, his dress sense. Those blue t-shirts, off-white jeans and desert boots. I wanted an outfit like that. In fact it wasn’t long till I got one. Although off-white jeans don’t go down too well with mums when you’re regularly scuffing your knees in the mud. Steve also brewed potato whiskey and didn’t bother with the finer points of the movie, like false papers and a civilian disguise. Of course he didn’t need to. He was Steve McQueen. He had his designer POW wear. Everyone else in the camp wore beat up old uniforms. Not my mate Steve. He modelled the kind of get-up every self-respecting movie star-escapee should wear. And as a result no gun-toting, trick-pulling German in the local town would ever look twice at him. He didn’t look anything like the other prisoners. In fact he only looked out of place inside the camp. I now know that his part was completely made up for the movie, and he chased himself on that motorbike, cause no one else could keep up; he was the best rider they could find. No matter, I still thrill to the sound of that so-easy-to-whistle theme and to the sight of Steve in his desert boots sauntering off to the cooler to play catch with his own designer baseball set. Why on earth the Germans didn’t spot him carting it in there I’ll never know, solitary wasn’t supposed to be a place to work on your ball-pitching skills, for goodness sake.

Noah’s great escape was dramatic but not so daring. For one thing he didn’t plan three possible boats - Tom, Dick and Harry. It was a one-ark affair by all accounts. I doubt he wore desert boots or called his enemy Fritz. One thing he did have in common with Steve’s cooler king – they both brewed firewater and drank a lot of it. And in Noah’s case it caused a major family snag. After Noah’s massive hit with the floating zoo he went into business as the first Oddbins and fell foul of the falling-down water. Staggering home one night he collapsed in his tent and one of his boys molested either him or his missus. The text says he was uncovered which when you translate it refers to having sex. Ham took advantage and Noah was not well-pleased. My Bible just says he saw his father’s nakedness but there’s a world of shenanigans smuggled inside this phrase which has been somewhat cleaned up here. Which explains why old man Noah slapped his son big time. Ham takes cruel advantage and Noah’s family starts to disintegrate. No sooner has the world had one wash than it needs another one. Quick - where did we leave that ark?

The Bible makes no attempt to hide this catastrophe which befalls the godly family. All our heroes fall one day, one way or another. They are after all only human. We long for champions who are impervious to problems and failure. But they just don’t exist. The good news for all of us is that every hero is flawed. Superman doesn’t exist. Spiderman can’t spin a web. We’re left with inebriated Noah, murdering Moses and pedantic Paul. Guys who have left us a paper trail of faith that we now follow with our spiritual Sat Navs. Their journeys were jammed with problems, questions, strengths and fears. And they paved the way for ours.