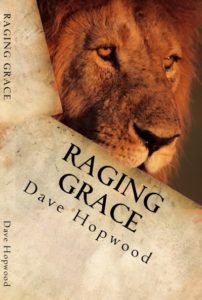 In 2011 Dave Hopwood began spilling his thoughts and shaking the world, not many people noticed. But now’s the chance to catch up. An indeterminate number of his writings have been crowbarred into this book. Short, sharp and sometimes skewed, these ramblings may also make you smile and feel a little more hopeful. You may never be quite the same again. On the other hand you might. But without reading this you’ll never know…

My very good friend and all-round top musician/ dad/person/entertainer Simeon Wood sometimes does seminars about music styles and the Christian faith. During this he plays a series of versions of the classic hymn Amazing Grace. The one he plays by The Dropkick Murphys is my favourite. (You can find this on YouTube if you look for it.) It’s fast, loud and played to a raucous crowd in a beery hall.

Now I'm well aware that this punk version of Amazing Grace by The Dropkick Murphys may not be to everyone's taste, (you may well have never heard it) and some may even find it totally unacceptable. But being an ageing punk fan I was immediately grabbed by the energy of the rendition, and watching it now on YouTube a shedload of thoughts come to me. Who would have thought a room full of folks at a gig like this would have been found singing John Newton's classic song of salvation? And for the entire world to watch on YouTube?

Amazing Grace was first published in 1779, 230-plus years ago, and John Newton wrote it following his own conversion and life transformation. Caught in a storm at sea, he cried out to God for help. John had been a slave trader and certainly knew what life was about. He'd rubbed shoulders with the people who moved in the most squalid circles. Some for the money, many because they were prisoners in chains. I wondered what he would have made of this - his gospel classic being pumped out of amps across that sweaty, beery hall.

My guess is he might be well-pleased. Surely he'd want this amazing, raging grace to be resounding in places just like this. I noticed that beneath the clips on YouTube of both live and studio versions of this song, there are comments about folks wanting this track played at their funeral. Now, I reckon Amazing Grace sung at a punk gig is not that different to Jesus taking the stories and acts of God onto the sweaty, murky streets of Galilee and Jerusalem, amongst the open sewers, rife poverty and seething cries for revolution.

To race for a moment to the other end of the musical spectrum, in 1999 Cliff Richard took The Millennium Prayer to number one in the Radio 1 charts. It stayed in the charts for four months and was at number one for three weeks. Some radio stations refused to play it yet it became the best-selling single of 1999 and the third biggest-selling single of Cliff's career. Some of us obviously did like it. Over the years it has been much-maligned but I can't help thinking that Cliff was doing a great thing, just like The Dropkick Murphys, bringing a prayer of hope to a new generation. The church put out its own millennium prayer around that time, but I think it's been largely forgotten.

Cliff sometimes gets a lot of stick, both for his style and his faith, but I will always remember wandering into a chip shop in High Wycombe, sometime around Christmas 1991, and hearing a little family happily singing his chart-topping Saviour's Day. Songs stay with us. I'm sure John Newton never imagined for one moment that there'd be a punk version of his song. But I'm glad there is.

Even Jesus Needed Other People

Before John the Baptist came along (one of the few people in the world with 'the' as a middle name by the way, along with Attila the Hun, Elizabeth the First and Rupert the Bear) water baptism was a ritual gentiles undertook when they wanted to convert to Judaism. It was a sign of leaving behind the old life and beginning a new one. John is using it as a sign for leaving behind sin and beginning again. The remarkable thing was this - he invited Jews to do it too. Everyone was called by John to leave behind the old and start the new. That said, why did Jesus get baptised? Surely he didn't need to repent of any sin or leave behind an old life?

Well for a clue it's worth looking back to Mary's cousin Elizabeth, a few shepherds at the manger and an elderly couple in the temple in Jerusalem. For a while Mary is the only one in the world who knows she is carrying the son of God, or even, that she is pregnant at all. She must have had days when she wondered if it had all been a dream, if she had imagined the angel. If she was really carrying a baby at all. And then she sees her cousin Elizabeth. And what happens? Without any prompting at all her cousin announces to her that not only is she pregnant, but she is carrying God's child. She confirms to Mary that this is not a dream, this is real. This remarkable story is really happening. That must have meant so much to the young and frightened girl from Nazareth.

Cut to the manger and a few grunting shepherds elbowing their way into the Christmas scene. Joe must have wondered why on earth these dodgy social outcasts had blundered into the picture. Thank goodness they were a long way from home and the neighbours couldn't see who they were mixing with. Then the shepherds start yakking about angels and signs in the sky and suddenly everything changes. Suddenly strangers are confirming to this lowly, insecure couple that they have not imagined this story. Nine months down the line it is all coming true, Mary really is the mother of God's baby, Joe really is the adoptive father. The outcast shepherds have no other reason in the world to invade their space, unless they really have just seen messengers from God who have told them to come and confirm the story.

And the shepherds of course love this manger stuff - God in a trough? Brilliant! If he'd been in a palace they'd have had no chance of getting near, here in the muck and the straw they can actually touch those tiny fingers, smell that new baby smell (!) and tickle the child's cheek! Plus no one else has bothered to show up so they have this miracle baby all to themselves, thanks very much. And later, when they finally leave, they won't shut up, they're telling everyone else in Bethlehem. Bethlehem has welcomed a king tonight and they didn't even know it. Not till those shepherds banged on a few doors. Sadly of course, Bethlehem would pay the price too. Herod's men would see to that - the first group of people to be persecuted for welcoming Jesus into their lives.

Cut to the temple in Jerusalem forty days later. An odd couple come shuffling out of the dark, coughing and wheezing and muttering to themselves. Oh oh, thinks Joe, better give them a wide birth, don't make eye contact whatever you do. But no, suddenly Anna and Simeon open up and everything changes, yet again strangers are telling Mary and Joe what's going on. More confirmation, more encouragement, that they are not mad. Those shepherds were telling the truth, Elisabeth was right. This is God's story, this is God's plan, and though there may be some long years of waiting up ahead, it has begun now.

Cut to the Jordan, 30 years later, and the same thing happens. John testifies that God's son is here. His cousin’s baptism is the experience which shows John what is going on. And John, who let’s face it is a good talker, passes on the news.

John announces to Jesus and those listening that he hadn’t known exactly who would be the one, all that God had told him was this - you'll know when you see a dove come down on the man as a sign of the Holy Spirit. John knew that someone was coming, he'd been warning everyone, but he did not know who. So John does not know his cousin is the Messiah until he sees the dove land on him. After that you can't shut him up - he tells everyone, including Jesus. He confirms to his cousin what had been growing slowly inside of Jesus, the conviction of his calling. And John tells everyone listening so they can know it too. Until that moment only Jesus had carried that truth inside of him. Now, like Elisabeth with Mary, and the shepherds and Simeon and Anna with the new baby, other people, without being prompted, witness to the fact that Jesus is different and God is doing something new. This is why it's so vital. It's others recognising God's work when they see it and bearing witness to that fact. Later Jesus would often rely on others doing this as he went around teaching, seeming almost shy at times to tell others about himself. Instead he wrapped his pearls in parables and miracles, anecdotes and questions, and then he waited for others to recognise him. And speak it out.
Still the same today really.

All The Wrong Credentials

When Jesus told his story about the two brothers, the two parties, the famine, the pigs, the inheritance, the depression, the set-speech repentance and the crazy father, I wonder whether he realised it would go down in history as the number one 'top of the parables pops' story. If I had a pound for every time I've heard a talk in church about this I'd have £2354.73. In reality, when Jesus told this parable it was deeply shocking for a variety of reasons. This is a retelling of Jewish history, this is the story of Jacob and Esau retold, but instead of Jacob/Israel returning filthy rich, here the prodigal is coming home just plain filthy... and instead of the angry brother out looking for Jacob to take revenge, it’s the compassionate father who’s there waiting, with reconciliation in his hands...