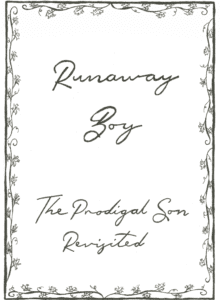 A tough, brutal, relentless tale of the prodigal son as he makes his way home through a war zone, colliding with a whole host of biblical heroes and villains along the way. Could be read one chapter a day as a different kind of daily reflection. Includes Bible references at the back.

He lifts the stone, weighs it in his hand for a moment, then eyes his brother. He reckons he could make it count. Has just enough strength left to hurl the rock and smack the older son squarely between the eyes. And why not. He deserves it anyway. With his self-righteous finger-pointing and curl-lipped accusations. He weighs the stone again. Looks at it and wonders.

He wakes thinking about women. It’s the first thing on his mind. A bedroom full of them. Beauties he hasn’t yet met. But he will soon. Very soon. Today he will grow up. Today he will become a man. Today he will pack bags, no, just one bag, take as little as possible. He’ll slip out of the house, start running and not stop until he finds life. He’s had enough of living with domesticity. The boredom and the routine is killing him. It’s time to wake up and do the right thing. It’s time to run away. All he needs do now is steal his father’s money and break his mother’s heart. It’s a tough thing but it won’t take long. He’ll be in the arms of a good woman, no two good women, before you can say
wild living.

In a city far away a short angular man, with brutal creases in his brow, stands and stares into the sun. The glare is hard but he doesn’t flinch. He has plans too. Plans to break this madness which is gripping the city. He turns and stares hard at the temple. Those age old stones which cry out about justice and God. Those rocks hewn by the hands of the creator. God lives here, heaven and earth collide in there like two angry wrestlers, fighters joining forces to bring truth to the earth. And now there’s a blemish on the building. A growing, murderous faction who plot to undo the people of God and bring this temple crashing to its knees. They must be stopped. He can see them now, a sweating shadowy group of misfits. Lepers, builders, criminals, widows, prostitutes, killers, revolutionaries. All those set to desecrate the home of a perfect God. They’re plotting now, right in front of him, right in front of the Chief Priests and Scribes, the men who know and serve the Most High. They laugh and snort and spit in the face of authority. He balls his fists and tastes bile in his mouth. They’re poisoning this holy city, they are going to bring death on everyone. He won’t let it happen. He will bring death on them. He will execute the men, make slaves of the women and smash their children on rocks. It’s been done before to preserve truth. It can be done again. God will be pleased. Pleased and relieved. It’s a necessary purging. The blight that is discolouring the city will be no more. All he needs is the permission and authority. And a small army. And maybe get the Romans involved too. He turns, he walks, he breaks into a run. The adrenalin gives him wings, the excitement of the coming solution spurs Saul on.

Not far away, at a local brothel, a crowd of men loiter nearby, none of them wishing to appear as if they’re in any kind of queue. But they are. And woe betide the man who tries to move up a place. Nobody chooses to be a prostitute. And in spite of the folk tales and fantasies, most are not beautiful. They are down on their luck, and their trade is their only option. They all have their stories. Tales of loss. But very few clients are concerned about that. Among today’s loitering ragged queue, his eyes wide with wonder, stands a young man with a single bag stuffed with money. He’s made it to the city. Lived through the unpleasant rigor of stealing from his father and ransacking his mother’s heart. And now he’s free. He ran hard and with every step he felt better. Now he knows, his life will really begin. He’ll never be the same again.
‘What are you doing here?’
‘Is that money I see in that bag of yours?’
‘You don’t want to waste it here. There are much better times to be had.’
He looks at the gaggle of locals. Happy, smiling, free. He nods and changes his plans.

Day one of the going home.
This journey is going to be a long one, any reason to delay it is useful. When you have a sordid past and a difficult future it is best to make the most of the present moment. Even the littlest things seem magical to him now that he is unsure of everything else.
So he stops and stares at a rock. Just another stone, like a thousand others on the road there. And a thousand other stones on a thousand other roads. Nothing remarkable. But he stares at it like a toddler, as if discovering it for the first time, having never seen that particular stone with that particular shade of grey before. Like God looking down at another benevolent act on planet earth.

He can’t put it off forever though.
He starts walking.
The days tick by.
Tick. Tick. Tick.

He’s been on the road three weeks now, though it feels longer. Three weeks since he limped away from squalor. Three weeks of traipsing across wasteland, leaving civilisation behind with each step; twenty-one days of desert and sun and loneliness and long, long nights. Only the cold moon for company in the dark, and the blazing sun each morning, sucking the water and the life from his bones. Sucking out his reason for living, his reason for the long walk home.

There are days when he thinks his time in the city might have merely been a bad dream. A year of his life condensed into one night’s musings. He’ll wake up one morning and find he’s not walked through war zones and battlefields, or played the cheat and the liar, or done so many dark deals in the alleys behind houses and inns to raise a little more cash to keep his miserable existence going. He could have dreamt it all. It might still be possible, too much good cheese and fine wine before bed. But he never does wake up, not from that dream, instead his half-sleeping and disturbed nights always lead to the next day and the next. One hell after another, a cursed life that had come upon him like a plague he couldn’t shake off. Where did the good times go? He never saw this plague coming.

‘Don’t move or I’ll gut you where you stand.’
The white noise in his head is interrupted by a low volcanic rumble of a voice. It isn’t the first time he’s been threatened. He turns, raising his scum-spattered hand as he moves, his broken, claggy nails jutting upwards towards the sun like talons.
Standing in front of him is the ugliest man he’s ever seen. Dressed in rags and smelling like death warmed up. A hood of bandages has been pushed back around his face, revealing dark hair matted with some kind of strange pink and grey filth. Everything about the man has a grey tinge to it. Except his eyes, his eyes shine like torches blazing in the depths of a cave.
‘What do you want?’ the Runaway asks, ‘I’ve done you no trouble…’
‘Shut up. Gimme your food.’
‘I haven’t got any food.’
The bandaged figure is taller and skinnier than him, a wiry spindle-chested bandit with a face of rotting papier-mâché. Wilting strips of hard grey flesh hang off it, dried and dead like peeling wallpaper.
‘What happened to you?’
The man sneers and his grey lips crack and shed a shower of dust. He coughs and sand trickles from the corners of his mouth.
‘You’re from some other world…’
The bandit sneers and raises his grey eyebrows.
‘You could say that, never thought I’d see the light of day again, that’s for sure. Got any money?’
The bandit waves the broken spear in his left hand, strapped across his skeletal hips there is a filth smeared dagger. Hanging next to it there is something that looks for all the world like a jawbone. The Runaway’s head swims. Has the bandit just finished stripping the flesh off it? He staggers back a little as the possibilities splash across his mind like a bucket of tripe.
‘You don’t look well,’ the bandit says.
‘I’ve been through a lot lately.’
The bandit laughs. ‘Not as much as me. Ever seen death close up?’
‘I think I’m looking at it now.’
‘Ever seen hell? I mean on the other side?’ the bandit snorts and shakes his head. He lowers his spear and stares up into the burning sky. He slumps and crouches in the dust.
‘Sit down with me will ya, sit down. It’s been a long time since I talked.’
He coughs and spits and his spit sits like a globule of grey and pink lava. He spits again and now there are two pink and grey eyes staring up at them from the dust. The Runaway sits.
‘Leprosy eats away at you,’ the bandit says and the Runaway recoils as he thrusts his left arm in the air. It’s a stiff solid stump wrapped in dirty cloth. He waves it at the Runaway...