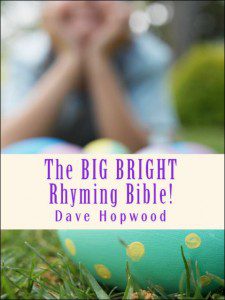 Lots of stories from the Bible with the fun left in!
Full of noises and rhymes about lions, whales, food, builders, sheep and talking donkeys. Young children will love it, and there are lots of big useful spaces for adding your own pictures. Draw all over it!

Available with colour text for £6.50
Or as The BIG BIG Rhyming Bible with black and white text for £2.75

On the first day of creation God made a choice,
Cleared his throat and raised his voice,
‘Let’s have lots of light around!’
He said out loud and jumped at the sound.

There was a creaking and a groaning and a splutter and a cough,
And suddenly, like a runner, the universe was off!
Bang! It began with a bright new light,
God said ‘That’s Day! And the other’s called Night.’

On the second day of creation God made the sky.
It was big, big, big and really rather high.
You couldn’t climb a ladder to paint it blue,
But God’s arms are long, so he was able to.

On the third day of creation God made some ground,
It was really good for having a run around.
It was like one big brand new giant play park,
You could have adventures in the light and the dark.

Then he got down on his creaky knees,
And started planting things, like flowers and trees,
Apples, bananas, carrots and corn,
Coconuts, pineapples - the list went on…

Fruity trees and strawberry fields,
Sweet little oranges that were easy to peel.
Sprouts and cranberries for the Christmas bash,
Potatoes you could roast or boil or mash.

On the fourth day of creation God made the moon.
It was like a big shiny silver spoon.
Then he made a star and set it alight,
That was the sun and it wasn’t half bright.

On the fifth day of creation God made living things
That crawl and hiss and fly and sing.
Things that bounce and bop and boogaloo,
Skip and slide and snuffle too.

Bunnies and badgers and bees and bats,
Kangaroos, cougars and crabs and cats,
Hawks and hippos, hedgehogs and hares,
Lions and leopards, baboons and bears.

Hippos and rhinos and dingoes galore,
Wombats and wasps – whatever they’re for.
Oxen and otters and osprey and owls,
Hoots and screeches and squeaks and howls.

On the sixth day God took some dirt in his hand,
Breathed on it and turned it into a man.
The man was lonely so God thought again
And made a woman to be his best friend.

God looked at things - he’d done his best
So he put his feet up and had a rest.
He’d finished his work on earth and heaven
So he invented the lie-in on day seven.

Drip drip drip - it was getting dark
As Noah invited them all on the ark.
Goats and geckoes and gibbons and geese
Ran across the land and swung through the trees.

Tramp tramp tramp - went the sound of the beat
Of a thousand animals moving their feet
Towards the ark, they were going in to get
A nice cup of tea and away from the wet.

‘Now,’ said Noah, ‘I want you all to be nice,
No eating one another, I won’t tell you twice.
You’re all to be friends while we’re on this ark,
Now it’s time for bed, as it’s getting quite dark.’

Baboons and bunnies snuggled side by side,
As large and small came in for the ride.
And a miracle happened, they all got along,
Though the rains kept coming and the trip was long.

They sometimes argued over using the loo,
First thing in the morning there was quite a big queue.
And sometimes Noah didn’t know what to do
With the massive pile of animal poo.

So he planted things in it and grew beans galore,
And he used some of it to plug holes in the floor.
Some of it got turned into skittles and a ball
And they had a big game of bowling for all.

There was quite a smell from the pile of poo,
So they burnt some of it to cook some stew.
They ate up the beans that Noah had grown,
Then produced more poo and so it went on.

Outside the boat the land was awash,
Noah looked out and said, ‘Yikes! Oh gosh!
It looks as if the whole world needs a mop.’
And he went back in and wondered when it would stop.

Well forty long days went by and by
Before things outside began to dry.
Noah sent a bird out looking for some land,
But it came back, shook its head, and pooed on his hand.

Noah said, ‘This is all very well,
But if we don’t get out soon, we’ll faint from the smell.’
Noah’s family was on board too -
Three sons, their wives and Noah’s wife too.

Then Noah sent another bird out after a while,
This one came back and gave him a smile.
It brought a branch and Noah smiled too,
At last they’d be able to leave this poo.

The water went down and the land reappeared,
The ark gave a bump and everyone cheered.
The kangaroos hopped and the fleas all jumped,
The tigers roared and the ark bump-bumped!

The wolves all howled and the cats meowed
And the guinea pigs' squeaks were really loud
Everyone was happy to be safe and sound,
And so they all ran out onto solid ground.

Old man Moses had some sheep -
Ee aye ee aye oh! (repeat these two lines if you want!)
With a baa baa here,
And a baa baa there,
Here a baa, there a baa, everywhere a baa baa!

Moses went and did the job -
Ee aye ee aye oh!
And he had lots of help from God!
(Slow down here) Ee aye… ee aye… oh!