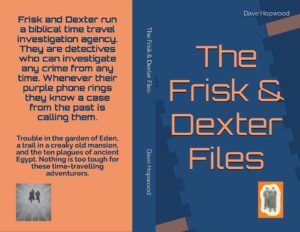 Just out: three daring tales in one case book. Time-travelling heroes Frisk and Dexter venture back and forth through the ages as they take on bad guys and good mysteries in this anthology of fast-paced biblical adventures.

Old MacNugget
In the morning Dexter awoke to the sound of frying bacon.
‘There's ice cold water from the stream for washing and crispy bacon for breakfast.’
He slapped some thick bread and sizzling bacon on an old metal dish, then plonked it down in front of Dexter and told him to eat it.
‘Have you been anywhere interesting lately young man?’ MacNugget asked him.
‘Yes, I have,’ said Dexter as he tucked into the huge bacon sandwich, ‘I went back to the very first garden. An amazing place, full of birds and plants and animals you never see anymore. Incredible colours. And the air was perfect, it tasted of strawberries and cream and chocolate and ice cream. Amazing.’
‘Did you meet anyone?’
‘Yes,’ said Dexter, ‘a man and a woman.’
‘Aye,’ said MacNugget. ‘That'll be Adam and Eve.’
‘That's it,’ Dexter piled another rasher of bacon on a slice of soft crumbling bread.
‘Did you bring anything back?’ asked the old man.
Dexter filled his mouth, chewed and nodded. His coat was hanging on the back of the door, he reached inside it and placed a small red apple on the table.
‘That'll be it then,’ said MacNugget.
Dexter frowned. He didn't understand.
‘That's what everyone wants. That fruit. I bet it's from a tree called the tree of life. Eat that and you can live forever.’
Dexter stared at the apple. The old man stood up.
‘Did you bring any other fruit back?’
Dexter nodded.
‘A banana, an orange, a pear and a peach,’ he said. ‘But I left them in my hotel and they got stolen. No one knows I still have that apple, not even Frisk. I tried to tell him but he kept interrupting…’
‘And Adam and Eve gave you all of those pieces of fruit?’ asked the old man.
Dexter nodded and the old man went on, ‘Then any of these could be from the tree of life. And if the bad guys have them now… you’d better go back in time and find out which fruit it is.’
‘I can’t, too dangerous. There’s a glowing giant there with a flaming sword.’
‘Ah yes. I see. Of course.’
MacNugget reached under his bunk, pulled out an old, battered case, opened it and took out a large leather Bible. He opened it and flipped the golden pages to the first chapter.
‘After banishing Adam and Eve from the garden, the Lord God stationed mighty angelic beings to the east of Eden. And a flaming sword flashed back and forth, guarding the way to the tree of life. That’s what you saw – a mighty angelic being. A divine bodyguard.’


True Life
‘Why did God do that?’ Dexter said, chewing on his last bit of bacon.
‘Because Adam and Eve had chosen to go their own way, they made a bad choice, and if they’d have lived forever in that garden they’d have gone on ruining the place. Making more bad choices. So they couldn’t eat from the tree of life anymore. God needed to make a new plan.’
MacNugget flipped past a huge pile of golden pages.
‘For God loved the universe so much he decided to send his son, to rescue it, and give people another chance at life. All those who trust in him will not be ruined, but will find true life. See, a new plan.’
‘That’s what the priest said,’ Dexter nodded. ‘The real priest I mean. He’d been tied up by the fake priest Mugs Marcos.’
‘Mugs Marcos! You should take care around him,’ said MacNugget, ‘he’s had a huge dollop of that strange fruit. He revels in bad choices that guy. Be careful. D’you think he stole the fruit?’
Dexter nodded.
‘Then you’d better hope this little red apple is the one from the tree of life, otherwise we’re all in big trouble.’
Dexter finished his breakfast, pocketed the apple and stood up.
‘Frisk went looking for Mugs yesterday,’ said Dexter.
‘Well you'd better hurry and find him, young man,’ said MacNugget.
‘How?’ said Dexter.
MacNugget walked to his bookshelf, it was full of very old books. He took down a small book of maps and flipped the pages.
‘I used to know Mugs well, till he crossed me. We were partners in crime, then one day he ran off with all of our money and left me in the hands of the police. In some ways it was the best thing that could have happened. Because while I was in prison I saw sense, and God changed my life. Maybe if you can catch Mugs he’ll start seeing some sense too.’
He tore a page from the map, placed it on the table and jabbed a field in the centre of it.
‘There! That’s where you need to go.’