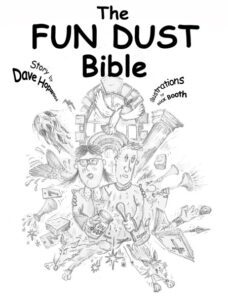 Jed and Yolanda find everyone asleep in church, so they decide to shake things up a bit with their Fun Dust. Chaos ensues as giants, sharks and poo-hunting prophets disrupt the services. Hang on to your hats and bring your sense of humour! NOW ILLUSTRATED!

The Bible meets Captain Underpants! A bunch of tales retold with a sense of chaos and madcap fun. And meaning too!

Part One:
The Bit Where Fun Dust is Born
The door creaked open, dust filled the air, moths fluttered about. Cobwebs draped like curtains across the windows, and spiders had made little beds out of the dust piles, with dead woodlice as pillows, and were dozing on top of them. At the front of the church there in the semi-darkness, a priest was talking from a pulpit. He looked sad and tired, because all the congregation were fast asleep. Some snored, some whistled old Abba tunes as they breathed out. Some licked their lips, obviously eating something very tasty in their dreams. Some had brought hammocks to church so they could be more comfortable, some had inflatable cushions for their heads and still others had duvets and electric blankets. In the background the priest kept on talking but it was hard to hear over the snores and whistles and sighs. Jed and Yolanda closed the door quietly and stood outside on the old stone church steps. They dropped down and sat looking worried.

‘There must be something we can do to perk it all up a bit,’ said Yolanda, who looked a bit like Elsa but with black hair, red glasses and blue jeans.
‘I’ve got that giant whoopee cushion,’ said Jed, who looked like Dennis the Menace without the curly hair and stripy jumper.
‘No, we need something more sophisticated,’ said Yolanda.
‘How about we fill the after-church tea pots with green goo?’ said Jed.
‘Ooh I like that! Or we could cling film all the doorways?’
‘Or… or… or…’ Jed’s eyes gleamed like big shiny bright things, ‘we could finish off our latest invention!’
‘Ooh you mean those exploding underpants, we could put them on the priest?’
‘No,’ said Jed, ‘that other invention.’
‘What? The hymn books full of boxing gloves on springs?’
‘No!’ said Jed. ‘I’m talking about that new Fun Dust recipe!’
‘Oh yes! Brilliant idea! … er what is that again?’
‘You remember, we sprinkle it in the air and when it settles on the nearest Bible...’
‘Oh yea! That’s bonkernuts! How close are we to finishing it?’
‘Close. We’ve mixed together the cheesy scrapings from my granddad’s feet, the dog drool from your Basset hound Mr Droopy, the nail clippings from your uncle’s ferret… all we need now is the leftover stinky juice from last Christmas’s Brussels sprouts that my aunt keeps in a pot under her bed. Once we mix that in we just need to microwave the lot and put it through a cheese-grater… oh and then add that secret, final ingredient…’
And so they snuck home and put the finishing touches to an idea that seemed bonkernuts to them, but might not seem so bonkernuts to the people in church. They might well have preferred the boxing gloves on springs, or the priest’s exploding pants… but that’s not this story. In this story Yolanda and Jed waited until the following Sunday and folks were dozing off again, then they snuck in disguised as a couple of dozing teenagers covered in cobwebs and dead flies, grabbed two handfuls of Fun Dust and threw them up in the air. The dust sparkled in the streams of sunlight, then little by little wafted down until one tiny speck of Fun Dust landed on an open Bible. Then BOOM! There was a roar and a huge giant shot up off the page. Fifteen people woke up and fell on the floor. Another five stood up thinking it was time to go home. Two more started singing and one tried to take up the collection. But sooner or later everyone stared wide-eyed at the giant who was hissing and growling at them with the worst breath in the world…

Part Two:
The Bit with the Giant
The giant had huge metal-looking teeth and fists like humongous rocks. He stood at the front and smashed one of his hands on the lectern. A million, billion, gazillion tiny specks of church dust rose up and in that one single moment everyone gasped as they realised that Rihanna the cleaner had been nipping off to the cinema to eat fizzy coke bottles and watch Marvel movies when she should have been wafting a duster about on a Friday afternoon. The noise of the giant’s hand-slap was so great that even the spiders awoke, shook their heads and sat up, and a few of the dead woodlice who had been doubling as pillows for them, blinked and sneezed and yawned there way back to life, it was such a shocking thing.
The giant opened his mouth to roar but his throat was a bit dry so it came out like a kitten purring, whose voice had just broken, so he took a sip of the priest’s water and discovered it was three month’s old; so he spat it into the air and caught it in his coat pocket. For which he got a round of applause. That almost made him forget to be scary, but then he remembered, roared and sent three short-sighted church mice skittering up the clock which hadn’t worked since the days when that nursery rhyme had first been written.
‘Listen!’ he yelled, he started saying ‘Fee Fi Fo Fum!’ but then realised this wasn’t that story. ‘Listen, you lot are all dead!’ he roared. ‘I know you look pretty lifeless already, but now I’m here you will be no more, you will be ex-people.’ And he threw back his head and laughed like a drain, which was a strange noise as no one had ever heard a drain laugh before.
Suddenly there was another voice. It wasn’t the priest, (he was too busy wondering if there would still be time for his 90 minute sermon) or the woodlice, who might have woken up but still couldn’t impersonate a human being. No, the voice was coming from the rippling pages of the Bible, the one still covered with a fine layer of Fun Dust.
‘Oh no you don’t!’ said the pages.
‘Oh yes I do!’ said the giant.
‘Oh no you d…’
The rest was drowned out as everyone thought they were at a pantomime and started to join in.
This made the giant really angry and he bared his metal-looking teeth even more and smashed his humongous rock-like fist on the nearest pile of hymn books. This made everyone gasp as they noticed the books weren’t all facing the same way and it was clear that Beyoncé the book tidier was actually nipping off down the ice cream place for a mountain of Ben and Jerry’s Rocky Road and Key Lime Pie on a Thursday morning instead of tidying the books.
Suddenly there was the sound of a yawn and a splurt...