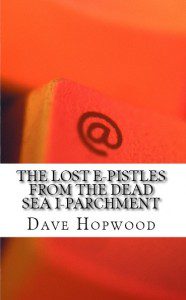 Okay. Let’s think. Hmm. I know.
Let there be… space, time, amoeba… no I’m getting ahead of myself. I know! Let there be… light! Brilliant. Love it. More light, lots of light. Big lights. Little lights. Flashlights. Wind up torches. Fantastic. Light on, light off. Light on, light off. On. Off. On Off. On – now that bit can be called er… day. And light off… that can be called night. Bit tired now. I’ll finish this email tomorrow.

Back again! Got another idea.
Let there be… some space. More space. Lots of space. Great. That separates the two runny bits, which I think would be better named… gravy! No, that’s not right. Dr Pepper? Frappuccino? No! I know - water. That’s it, the runny bits can be water. And the dry bit in the middle can be… the sky. Think I’ll go and explore the sky for a bit. I feel in the mood for some hang gliding.
I’ll finish this email tomorrow.

Back again! Day three now.
Let’s have some dry ground because it’s all a bit wet down there, the people will be getting soaked all the time and have nowhere to park their cars. What are people? Wait up – you ain’t seen nothing yet! Now the watery bits they can be called sea – that’s it. Now let’s bring on some growing things – things with seeds and leaves and blades – yes let’s have some grass, that’s good, and how about some trees, oaks, palms, ash, willow… this could take a while… I’ll be back.

Day four. I mean, I call it day four, but I haven’t actually fixed any dividers yet, created time if you like - till now! Yep. Today is the day we put lights in the sky and dates in the calendar. Start all the clocks and switch on your hourglass. Night and day is now a progressive thing. Today I haven’t invented just days, oh no, and not just weeks, no – I’m talking about years. Life is now a long thing. A minute to make a couple of tea, a lifetime to make a wise person. Time - the fourth dimension… time – for… a lie down…

Day five everybody. Fish and birds. Millions of the things. And I’ve just created the two most popular sports in Britain… fishing and bird watching… enjoy.

Day seven. Today I invented the lie in. Not the li-on that was day six. The lie in. And the breakfast in bed. Perfect.

How’s the holiday? We’re missing you here like mad. Your mother’s pregnant again and to be honest not looking forward to the birth, all those labour pains, she says it’s like pushing a three piece suite through a keyhole. Work’s picking up but all that digging is hard, hard, hard. The ground at this time of year is like concrete. We haven’t invented concrete yet of course but when we do I’m sure it’ll be like this ground. I miss the garden, the soil there used to be so easy to work.

Have you got yourself a girlfriend yet? I’m sure it would lift you out of the doldrums, ever since you and your brother had that little misunderstanding you’ve not been the same. He’s not been the same either of course.

Bumped into that talking snake again the other day. Remember him? He doesn’t say much nowadays, does more laughing. In fact we call him the laughing snake now. I shut him up a few times by jumping on his head with my hobnail boot but he always bounces back. Laugh laugh laugh. Drives me mad. Fancy an apple, he says. Yea, and I’ll shove it right up the place where his back legs used to be. At least he can only slither along these days, makes it easier to stomp on his head when he gets annoying.

Your mother’s business is going well – Figleaves-R-us. She’s designed a few new outfits. I still wander around naked from time to time but she goes bananas if she catches me, says it’s not decent, says the neighbours might have their curtains open and catch me. Not that we have any neighbours. Or curtains. She makes me wear all her new outfits, says I’m her guinea pig. Great! Who came up with that name anyway? Oh yea… me! The other day I had to walk around in some fig-leaf jeans crossed with leggings – figgins she calls them. I called them figgin all right and all, felt like a right dodo wandering around in them. I was very glad we didn’t have any neighbours with their curtains open that day. She says her business will take off soon, we just need some customers. At the moment I have to buy everything she makes. She’s started giving me loyalty points, says I can have a free pair of figgins when I get a million. Great! So far I’ve got 3000 palm shirts, 5000 grass skirts and a couple of hundred holly-leaf boxer shorts. Don’t mention it to your mother but I never wear the boxer shorts - it’s a bit of a prickly situation. I’ve got so many clothes I’m building new wardrobes like there’s no tomorrow. Which of course is a distinct possibility since we met that snake. There never was going to be a ‘no-tomorrow’ situation until that regrettable incident with the fruit crumble. I still can’t face apples. Your mum made some snakeskin boots the other day but I couldn’t go near them, that’s a bridge and a heel and sole too far for me.

We miss you son. Specially now Abel’s not around. We miss you both – but we can’t have Abel back. Not since you sent him… well… we don’t quite know where you sent him. No one’s been there before. There’s just a dark patch on the ground where he fell and a mound of earth where we put his body. Your mother still thinks he might get up again one day but I said don’t hold your breath. Cause I don’t think he is. We haven’t got a word yet to describe what state he’s in – but I feel I need to think of one dead quick. No… no… just can’t come up with anything yet.

Why did you do it? We know you two had been arguing for a long time, but there was no need for that. Were you jealous in some way? I remember when you were a kid you never quite got over it when he was first born, you were no longer the only child. Not quite as spoilt anymore. That was a shock to the system. Still, you didn’t really need to give Abel the kind of shock to his system with that rock the way you did. I still remember that sound now. I was out digging to plant some potatoes and it was as if the whole earth shook for a second, I heard you two shouting and there was that horrible cry and a crack and a thud… and then silence. And I wanted to hear the two of you shouting again, knocking the life out of each other. But it was too late, you’d already knocked the life out of your brother forever.

Sometimes I catch her crying. Your mother I mean. See her sitting under a tree somewhere sobbing the aches out of her heart, she misses you both so much. I try and talk to her but that’s not the same since the tree incident. We don’t communicate in the same way, I feel I can’t get through to her, I feel so isolated sometimes, alone though I’m right here with her.

We still have good times though, still mess about together, still go for walks and see those magical sunsets. Still swim and canoe in those mighty rivers that cross near here. And… she still gives me a good ribbing sometimes. Aye aye aye. Remember how she always did that? Just cause I’ve got one less than her. And you. And anyone else you meet on your wanderings. One less than everyone really…

Text us soon, you’ve still got that Blackberry haven’t you? And did you take the Apple with you when you left?