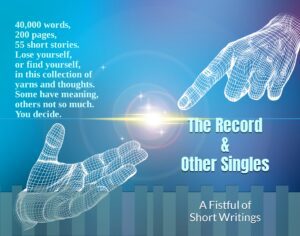 A collection of stories and short pieces, some just for the joy of writing, some carry a deeper meaning.

Intro
You hold in your hand a bunch of short stories and musings. Some hold great meaning for me, some are just ideas I wanted to explore. It’s no good me telling you which is which, because you can make up your own mind about anything that resonates. It may be that something I have scribbled for fun will prove to chime significantly. So I hand them all over to you. I hope you like at least some of them. Like any writer I like to be liked. But I do also hope you find these in some way encouraging. Encouragement is a great thing, and vital in this world stacked high at times with blame and bad news. Special thanks to Bill Colclough for his great story The Prince, included here. And also to Martin Purnell for his help and proofreading. And thank you for reading.
- - -

Half-lifers
The streets appear deserted… yet look closely and you’ll notice the grey ghostly beings. For the place is strewn with half-life. Glamorous and beautiful bodies slowly fading away. Litter blows around them, cats and rats hiss and nuzzle, foxes raid the bins at night. Draughty dank basements offer decaying and once glamorous places for the dark hours. Dens which at night end up chock full of the half-lifers.
It wasn’t always like this. At one time the streets never stopped pulsating with music, chatter, feasting and dancing. It was the partying capital, the place to be and to be seen. Rock stars, film stars, reality TV stars. Celebrity city. Along with the press to tell the world about them. So many famous folks frequently falling for one another, and over one another. Loving the limelight, trapped in its warm, shallow, demanding clasp, feeding on all that was so rich and sickly and life-sapping. Having it all and yet having little. Occasionally glancing back the way they came, a fading longing in their eyes for the days of simplicity and normalcy.
And so they stayed. And are still here now. Thousands of them, wasting away. Has-beens hooked on something that turned into less than the sum of its parts. A rose-tinted, sapping reality. New arrivals come and burn brightly even as they fade. And we visitors pass by, longing to be part of this odd reality. Wanting our share, even though we can see how damaging and deceptive this place can be.

Unreliable Narrator
She was always spinning yarns, making things up, could barely help it really. So, you could say it wasn’t her fault. She could structure her own reality, and squeeze events through that lens. We were on a cruise, that’s where we met. The Caribbean, I think. Or the Mediterranean. I’ve done a few. But only on one of them did things start to go missing.
‘People say I’m flighty,’ she would say as we stood on the deck, watching the waves and the dolphins ducking and diving.
She would talk of her life in the business world and the hotshots she had to deal with, and yet she didn’t dress as if high flying were her thing, and she didn’t carry herself as if she frequently rubbed shoulders with the powerful and the preening.
‘People say I’m whimsical,’ she would say, and I couldn’t help but frown. It was as if she was constructing a picture for herself, painting by numbers, filling in the colours for me when she really lived in black and white.
‘People say I’m dependable,’ she would say.
And I simply nodded.
The stories rippled around the other passengers. A bit of jewellery here, a few notes there. Little more than trinkets in some cases, but still, one doesn’t book a cruise to be pick-pocketed and relieved of that anklet your great-aunt left you.
‘People say I’m loyal,’ she said one day, and I asked her why. At which point she couldn’t seem to think of something others might have said to qualify the point.
‘About as loyal as a leech,’ I wanted to say. But didn’t. And so we went on watching the waves while she decorated her make-believe world with sayings for me, and secretly grew her shimmering nest egg drawn from the lives of others.
In the end the police were waiting for her when we docked. Two men in suitably imposing uniforms. Ready to help her unpack her luggage. She seemed astonished and bewildered, put on a remarkably good show for them.
‘No sir, I have no idea how these got here.’
Still, it added adventure to the trip, and no one really lost anything in the end. All goods safely returned.
The last I saw of her she had her face pressed to the window of the police car, her eyes boring into me as if she were hoping I might somehow come to her rescue.
But she shouldn’t have hoped for that. Not really. I’m an unreliable narrator after all, which means, you shouldn’t trust me. Maybe she was innocent. Maybe I planted it all in that big old case of hers. Maybe it was all me. Maybe…

The River
They find themselves beside a river, not so much a picturesque spot, the water is full of torn plastic bags, and broken shopping trolleys upended and protruding like bits of shrapnel. They did not choose this, and wonder how they might continue on from here. A wilderness kind of place, nothing quite the same anymore. Is there life here? This water used to be free flowing, dappled with sunlight, full of refreshment and beauty. Quenching every kind of thirst. But now look. Dormant, stagnant even. Streaked with muck and oil. The sky above bleak and bleeding with nothing but grey. No refreshment here. Used to run with the water of life, now it goes nowhere.
Life has turned on them, grabbed them by the scruff and dumped them here, in this forgotten place. And yet the song still rises within them, if they cannot sing of hope, they can still sing. Calling out, a chorus of questions. A lament drenched with longing. A knock-knock-knocking on heaven’s door. A white-knuckle kind of faith. When will the water flow again? When will it be cool and refreshing? When will the sun smash its way through the clouds once more? How long, how long, how long, how long, how long, how long… and gradually the volume rises, and as they sing they find others, further down the river, who begin to join in. Their song of questioning faith giving voice to those who had not been able to sing before.

Wise
They were smart and astute and clear-sighted, so they could spot others coming from miles away. And had memories that stretched further than any horizon. So they had a tally and kept it well. Her grip was good too so when they came within reach of those they needed to talk to, she quickly grasped the situation with both hands. No matter how large or small, the debts were owed, and people needed to be shamed and named and held to ransom. The two of them were smart and astute and clear-sighted so could do that.
Sadly they were not wise though, or grateful for the goodness they had received, in respect of the one debt they could never pay. The mistake-laden burden which had weighed them down, in spite of their obvious talents. The spectre of that debt a million times larger than these grievances of others, the small burdens they were so good at remembering and recording. Sadly they had not turned the forgiveness they had received into abundant currency for cancelling the debts of others. They were sadly smart and good at pointing fingers, but poor in wisdom and the freeing ways of another world.