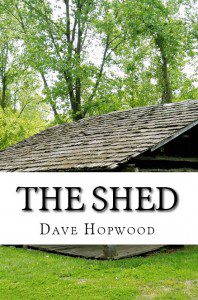 A novel in which a guy spends 40 days in the grounds of a moorland monastery.

‘Used it last year; I would recommend it highly. Might even buy a few copies to give away!’ Tony Aylward

A disgruntled forty-something spends forty days in a cabin in the grounds of a monastery. Once there he encounters wanderers, pilgrims, rock stars, world-changers and of course... monks. He may never be the same again.

‘The wilderness can be heaven or hell, sometimes a tortuous mixture of both. But anyone making the tough choice to follow a guy calling himself the son of man will surely find themselves in one sooner or later. This Christianity lark is no crutch, no easy option, no piece of cake. It’s been known to get people killed.’
Up The Creek Having Burnt The Paddle by Pew Hadovood

The cabin is little more than a shed with an outside toilet. And that toilet, let me tell you, is very outside. It couldn’t be more outside. I throw my rucksack on the narrow single bed, pull out my black leather Bible and drop into the solitary armchair. The arms of it are scuffed like the fist of a tired boxer, the padding is random and unique, the stumpy peg legs scarred from a million kicks and scrapes. This chair has seen some action. It’s about to see some more. With forty days on my hands I’ve chosen madness. I’m here in this cabin, deep in the grounds of an ancient monastery, stuck out on a wind-blasted moor, to get my mind around Lent. The time when Jesus took off to his own boot camp. He didn’t retire to a hut with an outside toilet, he took forty days and nights to wrestle with dark forces in a forsaken wilderness. With an outside toilet it must be said, more outside than mine. I wrestle with the frayed straps of my old rucksack; this bag has seen me through since I was in the third form at grammar school. Or year whatever as they call it now. It still carries the faint spidery outline of The Clash logo that I etched on it back in the days when I was young, single, confused and full of acne. I tip it up and strew the meagre contents on the bed. I call it a bed, we’ll see about that of course. I’ve brought a couple of massive jumpers, some old t-shirts, two pairs of jeans, a fat fistful of socks and just enough underwear to have something to put on, turn inside-out and back-to-front whilst I wash the other pair. Oh, and a tiny old hardback book by a little-known writer called Pew Hadovood. It goes by the name Up The Creek Having Burnt The Paddle and contains soundbite gems on Jesus’s desert period. Other than that I just have a few other thumping good reads - the likes of John Grisham, Don Miller, Nick Page, Tony Parsons, Nick Hornby, Conn Iggulden, Rob Bell, Henri Charriere, Paul Rusesabagina, Nick Baines, Nick Page, Phillip Yancey, Jeremy Clarkson, C Day Lewis. John Buchan, Sebastian Faulkes, Tom Freemantle, Mike Yaconelli, Robert Goddard and Sam Childers. Just a few. I can carry a good shelf-full because they’re on my e-reader. Well yes of course I have my Kindle, I’m intending to fast from technology and the modern world, but I need my Kindle. It’s vital – there are three Bibles on it.

I flip on the kettle – it’s an off-white electric thing, all stains and chipped plastic, also a single metal mug, with a plate, bowl and teaspoon, and a dented caddy of tea bags near an old pint bottle of milk. The milk is sitting in a saucepan of cold water to keep it from going off, though you have to wonder why anyone bothered, with the temperature outside being what it is and there just being a tiny one bar heater in the shed. No sugar in sight. It left town with all the other little luxuries. Ah well, Jesus didn’t have sugar in the wilderness. He didn’t have anything much, not even ‘a cup of cold tea without milk or sugar… or tea’, to quote an old piece of comedy genius. I add to this collection my stainless steel coffee pot, an old Bisto gravy tin full of filter coffee and a king-size packet of cornflakes.

Evening. 8 o’clock and dark already. No light pollution. With no internet/DVD/TV distractions I go outside wondering if I shouldn’t just turn in. Crazy of course because the last time I went to bed around this time I was wearing a woggle and had just got in from cubs. But somehow it doesn’t seem to matter here, I came to put life on hold. Forget the pressure of having to live like an adult. Just go to sleep because it’s dark. I stand cradling tea in my metal mug. There are so many dents and crevices in it - it feels like holding a hand grenade. I once heard it said that you can’t see the Great Wall of China from the moon, but you can see the moon from the Great Wall of China. And from a little snatch of rocky ground here in England. Can anyone out there see me? Staring at the night sky, and there’s a whole lot more of it out here than there is in the city, reminds me of those words in that psalm. number 8 I think it is. What are they again? ‘When I look up at the night sky and see the work of your hands - the moon, the stars, the planets - what are mortals that you should think of us, mere human beings that you should care about us?’ What amazes me about those lines is that they never date. Written thousands of years ago they still perfectly match the feelings of being a human, standing outside and staring at the vastness of the universe. That endless canvass splashed with those tiny specks of divine paint. And I’m a speck of divine paint on a speck of divine paint. Perhaps being human never dates. We may come with a bag full of gadgets now, and no longer use stones to bring down giants, but we haven’t changed that much.
Those stars once served as a nightly reminder to old Abraham that God was with him, a sort of divine post it note, not on the fridge but on the dark sky. And something up there guided a few astrologers to a baby in Bethlehem. Some people saw the stars as deities, ruling and governing. But not the God of the Bible, they were just furniture for him, bits of celestial Lego for shaping messages of comfort and hope.

First night I’ve not checked Facebook in three years. Think I may need some kind of patch.