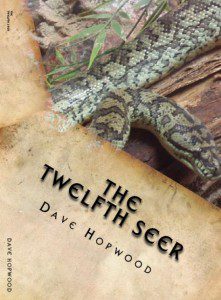 ‘Our son is LOVING your book!! The Twelfth Seer, can’t get him to do anything all he wants to do is read it!!! He says it’s awesome and absolutely loves the Biblical history and Old Testament references.’

Iran. Masouleh. A small village in the Alborz mountains 1,000 metres above the Caspian sea. The kind of place where families have lived simple lives for centuries. Children and animals wander the streets, no fear of oncoming traffic. Because there isn’t any. All vehicles are banned due to the size and inclining nature of the roads. There are steps and stairs everywhere and roofs serve as walkways to access the homes, shops and café’s as they perch on the mountainside like so many tan-coloured shoe boxes. An undulating matrix of carefully-crafted, mud-brick dwellings, hugging the hills, wedged tightly together, one on top of the other. So intricate that it’s spawned a saying in Masouleh, ‘The yard of the family above is the roof of the family below’.

In a rooftop café a woman in black holds a sheet of fax paper in her leather gloves. It contains a name, and six words scrawled beneath a black and white picture.

It’s a cheap contract for murder. And this woman does well with this kind of thing. She fingers the edge of the smudged flimsy sheet and rips it down the middle. A perfect separation. As the two halves of the page fall away, a near-distant face appears through the gap, sitting at a table outside another café. The woman smiles and flings the two halves of the contract away. She squints at the figure. That’s the man, she’s tracked him for a week and he thinks he safe now. She’s good at that, lulling her prey into a false sense of security before she strikes. She beckons to a waiter. He recognises her and nods, comes over to her and she orders something. The waiter leaves and returns with two plates which he places on the table. One has food on it, hard bread, cold meat, a clutch of figs and dates, the other is covered with a white cloth. In the near distance Carlos Gomez throws some money onto his table and begins to walk towards her seat. As he comes near the woman removes the cover and reveals a pistol on the second plate. As Carlos passes the table she reaches for the gun, but without looking at her Carlos grabs the edge of the table and pushes it over so that she and the gun hit the floor. Carlos begins to run.

The woman is up and following. A chase ensues through the narrow streets, across the roofs and courtyards and up the winding mountain steps. She calls out, appealing to some of the locals. The bad man just stole her bag. He’s a corrupt westerner, she’s a single woman alone. She needs help, without her money she will starve. Some of them join in, grabbing sticks and rocks. The occasional cooking implement. Children abandon their rooftop classes and goats bleat as they follow the growing crowd. The best entertainment in a long while. With every new rooftop more people join the chase. Even a few tourists, abandoning their teas and coffees in the terraced restaurants. And the fog comes down. Masouleh is famous for its fog. Drifts of mountainous white that wrap themselves around the yellow clay homes and the villagers inside them. There are some places in the world where the mist rises in the morning and is regularly burnt off by the sun. Not Masouleh. You’re lucky some days to get two hours of clear light. Carlos is not out of shape but he can’t run forever, his tanned, handsome features break sweat. He needs to find a safe place. Eventually he ducks down an ally into a derelict two story home. It’s being refurbished. Piles of mud, ash and straw dot the floor, waiting to be mixed into bricks. He clambers up the few steps to the level above. Runs to a dark corner and presses himself against the wall. The fog has taken most of the light outside, it won’t make him invisible but the gloom inside is certainly greater. He slips down onto his knees. Waits, listens and prays. The crowd are passing by, he can hear the running steps and garbled cries, the goats bleating and the kids laughing. They are moving on. Leaving him alone. He bows his head, stays there for a long time, kneeling with his forehead pressing against his hands. His gasping subsides and he wipes his brow with his muscled forearm. Gomez came to Masouleh to hide, a European amongst Asians, a city dweller in the mountains, a Christian amongst Muslims. For a while there it looked as if his plan had failed. But maybe not. There is a cemetery on the southern side, away from what little sunlight there is, away too from the houses and trinket shops and the rest of the village. He prays quietly for a while, words of gratitude and some moments of calm, then stands and makes his way quietly out. The crowds have gone, and the woman with the gun is no more. He slips through the fog and finds the graveyard. Tucks himself behind a huge rock and curls up to wait for the dark.

Then something bounces over the rock and off his shoulder. It’s a ball of paper. He picks it up tentatively, unfolds it. It falls into two parts in his hands, perfectly torn down the middle. It is the fax with the scribbled writing and the photograph. The cheap death sentence. Carlos looks up. A black boot appears around the side of the rock. He peers round. The woman from the café is standing there. She’s like a homing device. She proffers a gun and jolts the barrel to indicate that he get up. He has no choice, behind him the trees and grave stones make an impassable barrier. In front she has the way covered. The woman from the café places the barrel of her gun squarely against his forehead. A Hechler and Koch P7M13. Plenty of bullets tucked in that fat handle. Carlos crosses his eyes as he focuses on it, the women leers revealing two viper tattoos on her eye teeth. Things don’t look good after all.

‘You have it?’ she asks quietly.
He nods, doubting it will do him much good.
‘Who are you?’ he asks.
She shakes her head, doesn’t smile.
‘You don’t remember? I’m disappointed. You should do. But it’s too late now. And you certainly won’t remember this meeting.’
She holds out her hand.
‘Give it,’ she says.
‘Why? What good is it to you? It’s powerless on its own.’
‘I’m not here for a discussion. I’m here for the snake and I’m here to kill you.’
Her face is hard, cold, she might as well be explaining how to change a tyre. He reaches inside his jacket, feels the weight of the package in his fingers.
‘Slowly,’ she says.

He does move slowly. Until his closed fist emerges from his jacket. Then he jabs her across the jaw, a short, economical movement, efficient. He knows how to punch his way out of trouble. Her head snaps to the right under the impact. The gun slews from his forehead. He moves to hit her again. But she catches him a hard, backhanded slap which wrong-foots him, then a sudden jab which pushes his head way back. The gun is in his forehead again. The girl has blood leaking from her mouth and a bruise forming, but she is oblivious to it...