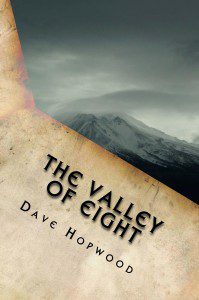 The second Max Maguire adventure : ‘Dave is such a good writer, he is able to blend Biblical history facts and brings them to life. And the endings  of his books are always something you don’t expect!’ Jesse Deng

An invitation to track down a missing world war two pilot takes reluctant hero Max Maguire on another globe trotting mission. Staying alive is tough as someone has his number and is set on taking him down. Another big screen, action-jammed adventure of Biblical proportions.

May 1948.
Choking smoke rises from the camouflaged wreck as Flight Sergeant Jack Ramone pulls himself clear, his legs smouldering. He beats at them with his hands, but he’s okay. He’s covered in sand and oil but that’s not the problem really. The problem is he’s stuck out in the Arabian desert miles from anywhere, with his only form of transport buckled and skewed across the sand in front of him. A quarter of a million square miles of heat and space and the Kittyhawk is a write off. He can probably salvage his water bottle and a few bits of food, and the documents of course. He must save those. But then what? He tore his arm in the crash and twisted his ankle scrambling out. If he takes the confidential folder and dies with it in the wilderness anyone might get their hands on it. If he leaves it here another plane might spot the wreck and come to investigate. But it could easily fall into the wrong hands. His radio died half an hour back so he can’t call for help. That’s out. He glances up towards the sun, shields his eyes from the blaze. Nowhere to shelter. In this heat he won’t last long. Rescue is unlikely. He could try and fix the radio. He ventures back into the plane, bats smoke out of his eyes and reaches inside the shattered cockpit for his supplies. The first thing his hand rests on is the tan leather bag. What to do?

Two years ago.
The redhead is dangerous. Suzie Kruger can see that. Probably plays all the time. Probably makes a living from it. Suzie’s not so great at cards, but she’s good at reading people. And at poker people are as important as the cards. The others drop out as Suzie throws in more cash and raises the stakes. Not the redhead though. She reaches into the blue and yellow carpetbag by her feet. Takes out something. A little velvet bag. Crimson. Clashes with her hair. The girl looks up, chews her gum with a smile. Gives Suzie a wink. Suzie hates strangers who wink at you as if they’re your best buddy. She stares back, her steely grey eyes boring into the youngster. The redhead tips out the bag. Suzie stares. First an amulet drops out. Then a ring. Then a crucifix. Not any crucifix. The Cordoban cross. The silver figure pinned to the pure gold, the three tiny jasper nails holding it in place. Worth a fortune. Old as time itself. Or so they said. The redhead looks up, grins again, pushes the amulet and the ring in to match Kruger’s stake. Then raises her with the Cordoban cross. Fool. No decent individual brings a thing like that to a poker table. And fool again because she’s about to lose it. Kruger meets her bet with a pile of cash.
‘And,’ she says, removing a black glove from her right hand, ‘I raise you with this.’
She slips a ring over the knuckle of her middle finger, lays a little titanium boat on the table. The one thing her dad gave her.
The redhead doesn’t blink. She’s good. Very good.
‘I don’t have anything else,’ she says.
Suzie smiles, bares the two vipers tattooed on her eye teeth.
‘Then you’ll have to fold she says and she reaches in.
‘Wait! No way. You know it don’t work like that.’ There’s a broad Aussie twang to her voice. ‘You have to take back the boat. Lower the stakes again. See me with what you got. This ain’t some kind of James Bond movie you know.’
Suzie narrows her eyes. ‘And this isn’t a Vegas Casino. We play by my rules. James Bond or not – you have to match my raise. Somehow.’
The redhead glances at the others. There’s a sweaty, clammy faced guy with not enough meat on his body. May well live on whiskey. Beside him a couple of blue eyed, blonde haired twins. Identical, except that one of them has a slight, intermittent nervous tic. Surfer types. All shoulders and pecks. Easy to beat on a card table, less so in a dark alley. Next to them, and near her, there is the guy in the glasses. Accountant type. Neat. Precise. Suited. Looks well out of place in this den of thieves.

They all of them shrug when the redhead looks to them, and the twins back away a little, shoving their seat back with a screech. They’re twice the size of the lean Suzie Kruger but they’re not getting involved. Overhead the fan whirrs and clicks. It kicks air about but doesn’t seem to make any difference to the heat. The redhead chews gum and blows a bubble with it.
‘Okay,’ she says, ‘I got this.’
She reaches into her bag and pulls out a battered, brown A5 envelope. She places it on the table, presses her hand on top and slides it across. It cuts through a ring of spilt beer before it reaches the middle. Suzie lowers her eyes, gives it a cursory glance.
‘What’s that?’
‘The truth about the Valley of Eight.’
‘The valley of what?’
‘Eight. If it’s right it could be worth way more than your cute little boat there.’
Suzie gives a fraction of a grimace. She doesn’t like the use of the word cute here.
‘How d’you get it?’
‘Distant relative, worked in Alaska.’
Kruger glances down at the envelope.
‘How do I know you’re not lying?’
‘You don’t. But if you won’t play by the rules, neither will I. Take it or leave it.’
‘She’s bluffing.’ It’s the clammy-faced guy, he licks his mouth, his voice rasps across his wet lips.
Suzie doesn’t even glance at him.
‘If you are lying, you’re dead,’ she says.
The girl just shrugs. Says nothing.
Silence. The twins shuffle in their seats. The sweaty guy licks his lips again.
‘I’ll see you,’ Suzie says quietly.
The redhead smiles. She can’t help herself. She lays down her cards...