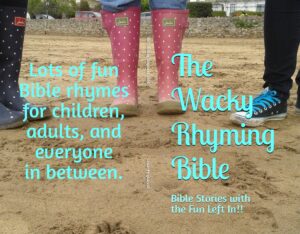 An expanded version of The Big Bright Rhyming Bible.

With lots more fun and thought-provoking biblical rhymes for children of all ages.

On the first day of creation God made a choice,
Cleared his throat and raised his voice,
‘Let’s have lots of light around!’
He said out loud and jumped at the sound.

There was a creaking and a groaning and a splutter and a cough,
And suddenly, like a runner, the universe was off!
Bang! It began with a bright new light,
God said ‘That’s Day! And the other’s called Night.’

On the second day of creation God made the sky.
It was big, big, big and really rather high.
You couldn’t climb a ladder to paint it blue,
But God’s arms are long, so he was able to.

On the third day of creation God made some ground,
It was really good for having a run around.
It was like one big brand-new giant play park,
You could have adventures in the light and the dark.

Then he got down on his creaky knees,
And started planting things, like flowers and trees,
Apples, bananas, carrots and corn,
Coconuts, pineapples – the list went on…

Fruit trees and strawberry fields,
Sweet little oranges that were easy to peel.
Sprouts and cranberries for the Christmas bash,
Potatoes you could roast or boil or mash.

On the fourth day of creation God made the moon.
It was like a big shiny silver spoon.
Then he made a star and set it alight,
That was the sun and it wasn’t half bright.

On the fifth day of creation God made living things
That crawl and hiss and fly and sing.
Things that bounce and bop and boogaloo,
Skip and slide and snuffle too.

Bunnies and badgers and bees and bats,
Kangaroos, cougars and crabs and cats,
Hawks and hippos, hedgehogs and hares,
Lions and leopards, baboons and bears.

Hippos Hamsters and rhinos and dingoes galore,
Wombats and wasps – whatever they’re for.
Oxen and otters and osprey and owls,
Hoots and screeches and squeaks and howls.

On the sixth day God took some dirt in his hand,
Breathed on it and turned it into a man.
The man was lonely so God thought again
And made a woman to be his best friend.

God looked at things – he’d done his best
So he put his feet up and had a rest.
He’d finished his work on earth and heaven
So he invented the lie-in on day seven.

Eve and Adam were never that shy
About cooking their best apple pie.
One day when hungry,
A sweet-smelling tree
Just happened to catch their eye.

They cooked pies all the time,
But not with apples of this kind,
They looked rather sweet
And tasty to eat,
With a ‘pick-me-pick-me!’ kind of shine.

Then a snake came along looking cute,
He winked at them – and the fruit,
‘Take a bite,’ he said,
‘You won’t end up dead,
You’ll be smart and cool and astute.’

As the snake slithered away
He chuckled to himself that day,
‘Oh what a hoot,’
He said of that fruit,
That would lead everybody astray.

Nothing wrong with apple pie,
It was about falling for a lie,
God had told them to watch out
For those kind of porky-pies,
But those poor folks thought they knew better and wanted to give that soul-destroying and non-scanning-last-line-of-this-poem diet a try.

Adam liked fruit salad,
Apples, grapes and pears,
Satsumas, limes and kiwis,
And some bananas too in there.
Starfruit, peaches, plums,
Figs and dates as well,
Apricots and clementines,
Everything was swell.

There was only one fruit
That Adam and Eve couldn’t eat.
Everything else was free,
A great big gardener’s treat.
We do not know which fruit
They shouldn’t have put in a pie,
But they did and everything changed,
And their crumble made everything die.

And then a long time later
Another gardener came along,
Telling funny and gripping stories,
And singing a whole new song.
He had come to change everything,
To bring hope and fruit that’s new,
The kind of fruit that makes us smile,
And brings us new life too.


Cain and Abel
From Genesis chapter 4

Brothers Cain and Abel,
They got on very well,
Except when Cain ate lots of beans
And sometimes made a smell!

Abel he had lots of sheep,
Called Baaaaaary, and Baaarbara too,
Cain grew lots of things,
Green beans and berries blue.

One day they went to pray,
And brought a present to God,
Abel brought the best of his sheep,
Cain brought some leftover sprouts he’d got.

But things went a little bit wrong,
As they sang their opening song.
God seemed to like what Abel had brought,
But Cain’s sprouts just gave off a pong.

Oh dear Cain had messed up.
He’d not bothered to bring his best.
So Abel walked away all smiles,
But Cain was all distressed.

Cain got very angry,
Said ‘Grrr!’ as he walked around.
He threw a great big hissy fit,
And then jumped up and down.

‘Let’s go for a walk,’ said Cain,
‘All right.’ his brother said.
But they didn’t do much walking
And pretty soon Abel was dead.

God heard about what happened,
‘What have you done?’ he cried.
‘I love you and your brother,
But now one of you has died!’

Cain got his packing orders,
And so he upped and stood.
He’d let himself get angry,
And that was not so good.

Cain was not able
To stop from doing wrong,
And we all make mistakes too,
We are not so strong.

But God understands,
And that’s why Jesus came around,
To offer us forgiveness,
And help when we fall down.

Drip drip drip − it was getting dark
As Noah invited them all on the ark.
Goats and geckoes and gibbons and geese
Ran across the land and swung through the trees.

Tramp tramp tramp − went the sound of the beat
Of a thousand animals moving their feet
Towards the ark, they were going in to get
A nice cup of tea and away from the wet...