A new book full of thoughts, rewritten Bible bits, and creative pieces for reflecting on the life of Jesus.

How grounded and connected he was, how understanding and caring he is, and how full of life. For an extract, read on… 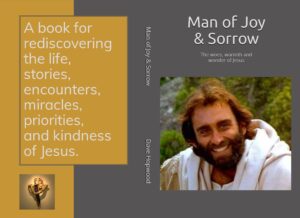 Imagine the scene, Simon Peter, that big fisherman from Galilee, is pacing and talking, talking and pacing, moving his arms as he speaks, making shapes and punching the air as he presses home the stories he’s telling. A younger, smaller guy in the corner, is scribbling away, missing words and dropping letters as he tries to keep up. There’s nothing calm or dignified about the scene. Life drips from the stories, like sweat from the storyteller. On and on and on, tales of encounters and arguments, miracles and murder. A hillside littered with chewing people, a rocky outcrop triple-speared by three crosses and three men bleeding to death. And two gardens, one shrouded in shadows and betrayal, the other bathed in the new dawn light, as angels leap out from tombs, and a gardener waits to surprise a broken-hearted friend. And these are just glimpses, just snatches of what the big fisherman is saying. Pouring out the globe-moulding odyssey he has lived through for three years.

I’m not sure that a book like this can truly capture the essence/reality/wonder/pain/laughter/fully-human-and-sublimely-divine nature of Jesus from Nazareth. Perhaps it’s just plain foolhardy to try, but here’s my attempt anyway. I hope it’ll be helpful and make sense, and I hope it’ll be grammatically correct, or at least come close to that. Mind you, for years I thought because was spelt becouse, so we can only hope. I hope there’ll be some surprises too.

Some might say it’s better to just pick up a Bible and read that. I love the gospels and there is no doubt that the best way to encounter Jesus in page form is to open up that profound, startling, seething-with-life Good Book and start reading the breathtaking verses that Mark has scribbled down for us. It’s widely thought that Mark was recording Peter’s narrated accounts and at times it feels as if it was a challenge for him to keep up with the big fisherman, as he spilled his story.

So all of that said, I guess what I can do is try and come at all that from a side door, through a little used fire-exit, and do my best to add a few extra splashes of paint to what Mark and the other first-century writers have written. Their words come at us loaded with grit and glory. And infused with the DNA of the Holy Spirit. I can’t compete with that.

I’ll be using lots of stories and creative bits, because, well, why not? Better to offer things in an open-handed style for you to chew on and think about. This is what Jesus did, so how can I not follow that way? (Plus I love stories. So that’s most probably the real reason!) You may find that some of these thoughts and tales seem random, and you have to join the dots for yourself. Also certain stories get repeated and revisited. This is deliberate. We often need to hear something a few times for it to start setting us thinking. (That’s my excuse anyway.)

There have been three occasions where people have been shocked/bemused/horrified/taken aback by the sudden loudness of my ‘I know how to stage project’ voice. Once when I was working on a training exercise in a theatre, and we were told to ask an imaginary audience to leave the auditorium due to an imaginary fire. Secondly when we were trying to move a group of sheep from one field to another. (Let’s face it, sheep take a lot of moving). And thirdly at a wedding when I was trying to herd guests from one location to another, and no one really realised I was the best man, and that it was this best man’s job to yell at them. On all three occasions I recall the perplexed, bemused looks and the take-a-step-back recoiling. These recollections make me flinch when I remember them, and I still feel the reaction was a tad unfair. I mean, people should expect me to boom if you ask me to do that, tell me to issue a command and I’ll come out with all tonsils blazing. So to form a tenuous link… I’m sure that Jesus often wrongfooted people. I’d like to have been a fly on the wall when the booming of his actions and the unexpected nature of his stories and miracles made jaws drop, eyes widen and bodies recoil. I think he must have garnered that startled reaction regularly. In a way that he doesn’t seem to now. We often talk about walking on water, or turning water to wine, and yet don’t stagger a little into the furniture as we say these things.